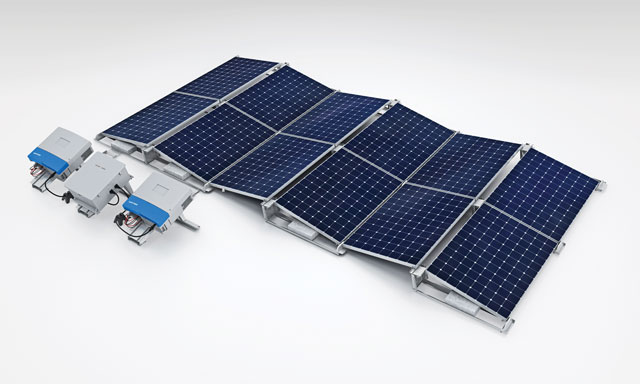 There are two big “I” words for the solar industry in 2016: investment and integration. This could be especially important for commercial projects. Achieving a real widespread influx of commercial solar installations — from large companies, small companies and everyone in between — will likely require some new solutions and services from the industry.

One of these fancy new integrated solutions is the Helix platform just launched by SunPower. We chatted with Matt Mayberry, senior manager, commercial products, to understand more about the system’s capabilities.

For starters, the Helix platform is a fully integrated commercial solar solution that combines solar power production and energy management. Every component of Helix is engineered by SunPower, with a focus on optimization, cost-efficiency and reliability. Outside of what SunPower has created, the inverters are provided by SMA, under a proprietary SKU that is only available to SunPower, and the energy management system was co-developed with EnerNOC.

Helix is a pre-engineered, modular solution that is built to last and fast to install, enabling customers to scale their solar programs quickly with minimal business disruption. The Helix platform is standardized across rooftop, ground and carport (more on that below) installations.

“The most difficult challenge was creating a standardized platform while still enabling adaptability to meet varying customer and site requirements,” Mayberry says. “The solution to this problem was ‘pragmatic standardization’ which we achieved by focusing on modular elements of the system that could be configured together to achieve almost infinitesimal combinations. This enabled repeatable efficiency while also creating a highly adaptable system that can be tailored to a customer’s specific energy objectives.”

Panels. SunPower says its solar panels can produce 60 percent more energy from the same space over the first 25 years than conventional panels and are the only solar panels that have the Cradle-to-Cradle Certified Silver designation. But part of the efficiency story comes from the optimization of the full system. They are control freaks like that.

Mounting. The mounting hardware, for example, according to Mayberry, enables Helix to achieve 72 percent more energy generated over 25 years when compared with conventional solar power systems. This is primarily due to the combination of the high-efficiency solar panels and the Helix Dual-Tilt roof design, which maximizes roof coverage.

Power station. This is where SunPower removed a lot of cost from the system as well as simplify the install. Basically, the power station is plug and play. It is preconfigured and includes the inverter, AC combiner, eBOS mount, DC branch and AC whips while eliminating the need to strip and land wires on site.

That level of pre-configuring is unusual in the commercial sector.

“Nearly all of the wiring is completed in the factory, reducing labor costs during installation, eliminating wiring errors and enhancing safety. Locating the inverter closely to the AC combiner eliminates the need for a DC combiner, DC disconnect and dedicated AC disconnect, further reducing costs,” Mayberry says. “There’s no need to mount the power station separately as it is an integrated component of the mounting system. No roof penetration is necessary.”

By attaching the power station to the mounting system, the Helix platform complies with NEC 2014 6901.12 Rapid Shutdown requirements, eliminating the need for dedicated components to serve this purpose.

How exactly can Helix save time and cost?

• “Connecting the power station is fast and easy, requiring no manual stripping or landing wires on the roof. Nearly all of the wiring is completed in the factory, reducing labor costs during installation, eliminating wiring errors and enhancing safety. “

Finally, all of those pieces are put together by SunPower, which makes for an attractive holisitic solution for businesses looking to take greater ownership over their energy costs.

“It is well-suited for multifacility companies that want to accelerate growth of their solar programs cost-effectively and drive down costs such as demand charges across all their facilities — those with solar and those without,”

Mayberry says. “Helix is also designed to work for mid-size companies and organizations such as school districts.”

One of the first big names to jump on board with the new platform is Bed Bath and Beyond, which will construct the Helix system on eight stores in early 2016. 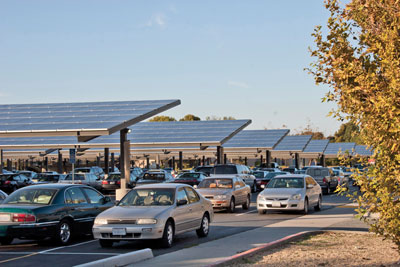 In November, at SunPower’s Analyst Day, the company announced the acquisition of leading solar carport supplier Solaire Generation. Solaire and SunPower have been working together since 2010 and have projects together totaling more than 38 MW. Combining the expertise of Solaire and SunPower will greatly improve and accelerate the Helix Carport platform.