Mass Tank, the largest steel tank manufacturer in New England, has partnered with Solect Energy of Hopkinton, Mass., and IGS Solar to install a 457-kilowatt (kW) system on the corporation’s 60,000-sq-ft manufacturing facility in Middleborough, Mass. The solar energy generated from the array will be sold to Middleborough Gas & Electric to help the town meet its growing energy demands. 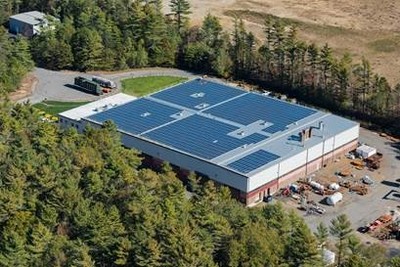 Mass Tank first thought about renewable energy solutions when they became one of the contracted manufacturers for the Cape Wind project, a large offshore wind farm located in Federal waters off the coast of Cape Cod.

“It was through this engagement that we learned how important wind, solar and hydropower are to our future. From that point on we decided as a business to commit to helping energy issues in anyway that we could,” comments Carl Horstmann, President at Mass Tank.

Interested in contributing to the clean energy economy and reducing their energy costs, Mass Tank decided to look into owning and installing a solar energy solution on their facility. However, due to regulations sanctioned by the local municipal utility Middleborough Gas & Electric, Mass Tank soon found out that a “behind the meter” solar installation, where the energy is both generated and consumed directly on-site, is prohibited. It wasn’t long afterwards that Mass Tank decided to approach Middleborough Gas & Electric to work on a solution that would allow both entities to support and benefit from solar energy.

“We’re always looking for valuable additions to our power portfolio that will help us mitigate peak demand, and our driving concern is reliability and cost for our customers,” said Jackie Crowley, GM of Middleborough Gas & Electric. “Any project we consider has to be able to stand on its own merit, and after taking into account the many benefits and practical considerations of this local project we decided that it will serve the community and the Gas & Electric Department’s energy portfolio well over a long time.”

With Middleborough Gas & Electric on board, Mass Tank entered into an agreement with Solect and IGS Solar, under which IGS leases roof space from Mass Tank in order to host the array, own the system, and sell the solar electricity generated to Middleborough Gas & Electric through a power purchase agreement (PPA). As the project originator and an experienced solar PV developer and installer, Solect Energy will build, operate and maintain the solar array over 20 years.

The power generated on-site at Mass Tank will be purchased by Middleborough Gas & Electric to provide clean energy to local residents and businesses, including Mass Tank. Under a long-term agreement, Mass Tank will receive annual lease payments for the use of their roof. In addition to directly supporting the deployment of solar energy, Mass Tank practices sustainability through reducing waste, driving hybrid cars and supports businesses that are environmentally considerate.

“This project provides Mass Tank with an additional source of revenue for a 20-year period and also allows Middleborough businesses and residents to benefit from adding local solar energy to the supply mix without the costs and liabilities associated with owning a system,” says Craig Huntley, Partner and Chief Development Officer of Solect Energy. “It’s really a win-win-win for all parties involved.”