Beyond the rooftop: How offsite PPAs change the game for solar professionals 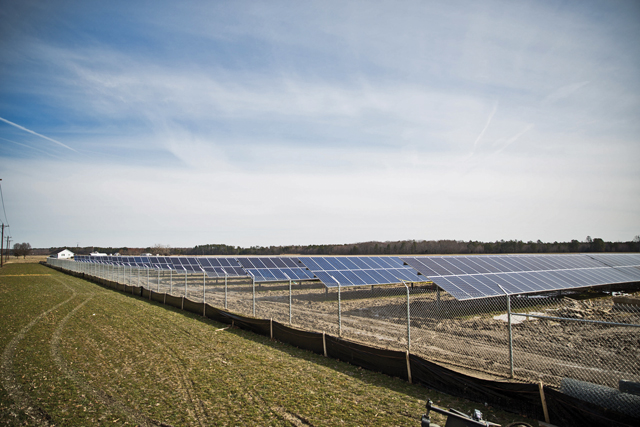 Like many of its peers, the management team at the National Aquarium in Baltimore struggled to find an adequate solution to meet its renewable energy goals. Given the unique architecture of the building, the National Aquarium’s limited and aging rooftop could not support meaningful electricity generation.

Determined to make a substantial environmental impact, and equally resolved to support local development in Maryland, the National Aquarium entered into an offsite power purchase agreement (PPA) for a 4.3-MW PV project. Located in nearby Cambridge, Md., and online as of May, the system will generate nearly 6,000 MWh of energy in its first year of operation, enough power to meet nearly 40 percent of the National Aquarium’s electricity needs for the next 25 years. The Cambridge project embodies the Aquarium’s core conservation values and does so in a fiscally sustainable way.

Over the past decade, the evolution of renewable energy financing models has spurred a massive market expansion around the world. While this is wonderful news for the industry as a whole, to date, these mechanisms have best served only the largest and smallest energy users. What about those entities that fall somewhere in between?

More than ever, mid-size corporate and institutional organizations are searching for ways to reduce their carbon footprint without sacrificing their bottom line. Until recently, the options to support projects of this size have come with some pretty significant economic limitations. The National Aquarium is just one example of a new model that’s arrived to answer that question.

Before examining the new trend, let’s take a step back to get a better sense of just how far the market has come.

Is standardized solar permitting the next industry breakthrough?

The Evolution of Project Financing

● Renewable Energy Certificates (RECs). Fifteen years ago, the Portland-based Bonneville Environmental Foundation and the U.S. EPA’s Region 10 office completed the first retail renewable energy certificate (REC) transaction. A REC, sometimes known as a “green tag,” is a tradable energy commodity that serves as proof that 1 MWh of electricity was generated from a renewable energy resource. Before RECs, commercial customers were at the mercy of their utilities. If the local utility didn’t offer a renewable energy option — and most didn’t — customers were out of luck.

● Rooftop Solar Leases. Inspired by residential solar leasing products, organizations adopted commercial rooftop leasing as a cost-effective way to leverage solar energy. Rather than investing in the upfront equipment and installation costs of solar power systems, property owners would grant project developers access to rooftop space in exchange for a share of the economic benefits of the installation.

The solar lease model became a staple for commercial rooftop solar projects in the United States because of the value and flexibility, but the traditional leasing model is not feasible for all electricity customers as many firms don’t own the buildings they occupy. Moreover, for those who do own their facilities, rooftop size and condition can limit or eliminate the possibility of installing a PV system.

● Offsite Wind PPAs. For large electricity users without adequate rooftop space for solar, offsite wind PPAs offer a solid alternative. PPA customers pay a fixed price for each kWh produced over a contract term — ranging from 10-25 years — allowing organizations to hedge against rate increases and to reap both the economic and environmental benefits of renewable energy. In 2010, Google announced a series of deals with Florida-based NextEra Energy, including a 20-year offsite wind PPA that captured national attention. Because of wind PPA’s compelling economic and environmental story, major organizations like Amazon, Yahoo, Microsoft and Wal-Mart recently joined the bandwagon of institutional wind buyers.

While those three models all helped to expand renewable energy adoption, the industry was unable, until recently, to serve a key demographic: organizations that don’t have rooftops suitable for solar, and that don’t have electricity loads large enough to support large offsite wind PPA purchases.

The renewable energy needs of the underserved mid-range market were finally met in 2014 with the introduction of the offsite solar PPA. Today, this model enables customers to tap both the economic and environmental benefits of solar power, while freeing them from the practical and logistical challenges presented by rooftop systems.

The beauty of this model lies in the flexibility afforded by offsite projects. No longer constrained to the dimensions of the rooftop, systems can be sited to minimize costs and sized appropriately to meet the unique energy profile of each customer. What’s more, offsite solar projects offer benefits to other stakeholders, supporting utilities and communities, at large.

● For the utilities: Offsite projects pay to support transmission and distribution networks and serve as distributed generation resources on the grid. As a result, these projects support grid resiliency, a key concern for utilities charged with managing an aging electricity grid and integrating a growing number of rooftop systems.

● For surrounding communities: For landowners, these projects generate sustainable, long-term revenue streams from what are often unusable plots of land, including brownfield sites. Solar projects support the local tax base, while causing no environmental damage. Incredibly, the solar industry now employs twice as many workers than the coal industry does.

Catalyzed by technology cost reductions, electricity market deregulation and financial creativity, the booming solar market is finally allowing a wide range of customers to purchase energy in an economically and environmentally responsible way. The offsite solar model represents a key component of our evolving energy system — one that delivers real benefits to an underserved market that demands clean, affordable power.

Bryce Smith is the co-founder and CEO of OneEnergy Renewables.