2017 isn’t quite the banner year for solar that 2016 was. Aside from the trade case drama, it has also been a tumultuous year for the big names in the residential solar space. Three of the largest installers, including NRG Home Solar, Sungevity and Direct Energy Solar, have gone bankrupt or exited the residential sector. Since struggling SolarCity was acquired by Tesla, its residential business has dwindled. But Sunrun, who has seen moderate and consistent deployment growth over the last few years, has worked to fill the gap and serves as a prime example that struggles in the residential solar industry may stem from company-specific failings rather than industry-wide trends. GTM Research saw this coming, and relayed the following stats on the residential solar sector. 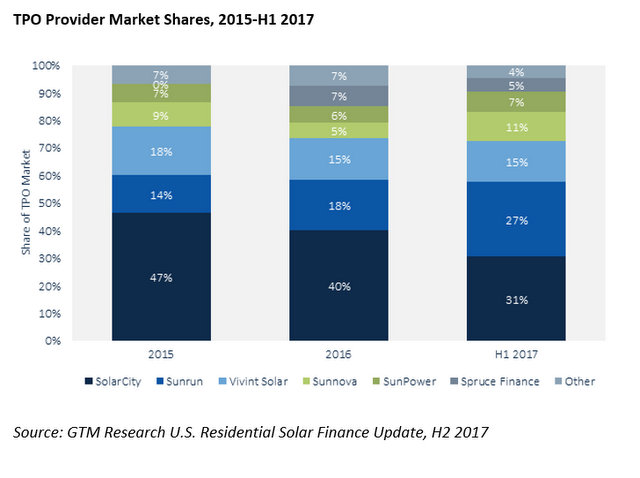 As a residential lease and PPA provider, Q3 earnings presentations indicate that Sunrun has already surpassed SolarCity based on capacity financed so far in 2017. Through the first half of the year, Sunrun narrowly missed the top spot in the TPO market with 27% market share, just behind SolarCity’s 31% share and up considerably from its 18% share in 2016. That difference of 4% market share between SolarCity and Sunrun equated to just 19 MW over two quarters. And in Q3, Sunrun financed 80 MW of systems, while SolarCity financed no more than 59 MW (a ceiling, as some of SolarCity’s systems were from its commercial business), a difference in Sunrun’s favor of more than 20 MW.

Of course, there are other ways to look at the market outside of who is financing systems. Much of SolarCity’s fall as a top residential financier has been due to its deliberate pivot away from TPO financing in order to increase its cash position. Today, nearly half of SolarCity’s systems are sold for cash or loans, and this pivot is inextricably linked to loan provider Mosaic’s prominent position in the loan market.

But looking at the residential market by total deployments (including leases, PPAs, loans and cash sales), GTM says Sunrun likely surpassed SolarCity as the leader in the space for the third quarter of 2017. According to the U.S. Residential Solar Finance Update, SolarCity deployed 233 MW of residential solar in H1 2017, Sunrun deployed 148 MW, and Vivint Solar deployed 93 MW. Yet in Q3 2017, these companies deployed 109 MW, 90 MW, and 47 MW, respectively (SolarCity’s 109 MW includes its commercial business).

So, if 18% or more of SolarCity’s Q3 installations were in its commercial business (which is reasonable given SolarCity’s historic channel mix), then Sunrun would have narrowly out-installed SolarCity in the quarter. 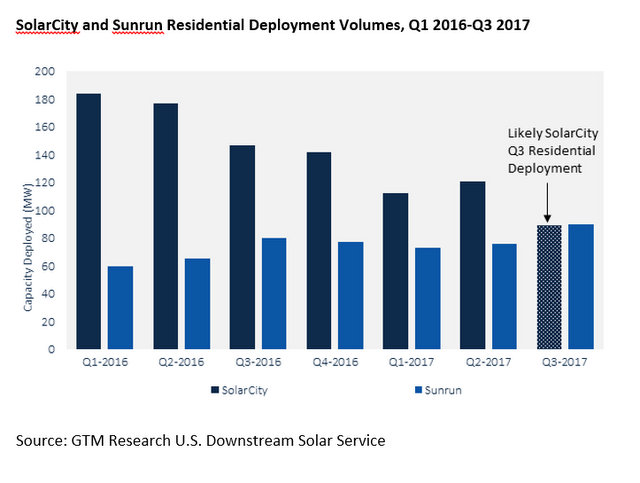 Both SolarCity and Vivint have endured high customer acquisition costs as mature markets have become oversaturated, and the companies have been forced to scale back operations in unprofitable markets. Specifically, SolarCity has dropped its door to door sales channel and instead is focusing on acquiring customers through digital leads. Vivint Solar, which has traditionally relied primarily on door to door sales, has added retail sales to its mix. And while these customer acquisition strategy changes are aimed to bring costs down in the long term, the slow-moving transition to these new strategies has had a short term effect of increasing costs and decreasing sales.

Equally important, both SolarCity and Vivint Solar have made concerted efforts to increase cash and loans sales as a portion of their product mixes.

While the companies make better margins off their TPO products, years of selling leases and PPAs (where the companies receive payment from the customer over a 20 year term) have left both companies in dire need of cash in the near term. Cash and loan sales allow the installers to realize immediate payment for systems they install. But even this change comes at a cost. SolarCity and Vivint Solar employ salespeople who have been selling leases and PPAs for more than 10 and 5 years, respectively. The transition to selling loans has been difficult on sales teams that are forced to change their long-honed pitches, contributing to the sales declines by these companies.

But as nearly every other large national installation company has struggled to grow this year, Sunrun is a standout as its growth has outpaced the market. Unlike its largest competitors, Sunrun has seen customer acquisition costs come down in recent quarters. And unlike SolarCity and Vivint Solar, Sunrun services the market both through its direct installation business as well as with Sunrun leases and PPAs delivered through its dealer network. By utilizing a dealer network to deploy systems, Sunrun is able to grow as the long tail of installers in its network grow as well. And while not all long tail installers are growing, Sunrun’s stringent vetting of installer partners weeds out the weaker installation companies who are more likely to go in and out of business with market boom and bust cycles.

Fact: People want solar energy. Here are some stats on why

Is the residential solar financier shakeup here to stay?

As SolarCity and Vivint Solar have deliberately scaled back operations and moved away from employing a strictly vertically-integrated installer and financier model, Sunrun has jumped on the opportunity. Unlike its competitors, Sunrun continues to primarily sell TPO systems through its direct and installer network businesses.

But recent success for Sunrun does not guarantee continued success. While Sunrun is now the leading TPO financier in the residential solar market, questions remain as to the size of that addressable market. As the residential market grows into the future, GTM Research expects the TPO market to stay relatively flat through 2022, putting a ceiling on the market that Sunrun can address. The current transition of the market away from TPO, which, according to GTM Research, will make up just 37% of the residential market in 2017 as compared to 53% in 2016, is primarily due to what leading installers are choosing to sell.

But there is downside risk to the size of the addressable TPO market. As residential system costs continue to decline, consumer-driven demand for TPO financing could become a prevailing force squeezing that market, leaving Sunrun behind the curve. There is certainly ample opportunity for Sunrun to increase its market share with its leases and PPAs, though the company has little room for error in a market with a low ceiling.