In one of the largest solar projects undertaken in North Carolina, Google will benefit from Duke Energy Carolinas’ Green Source Rider program – meeting a portion of the power demand from the company’s data center in Lenoir with solar energy. A 61-MW solar project will be constructed in Rutherford County in Duke Energy Carolinas’ service territory. Under a power purchase agreement with the Rutherford Farms LLC solar project, Duke Energy will secure power to meet new energy demand from Google’s expanded data center. 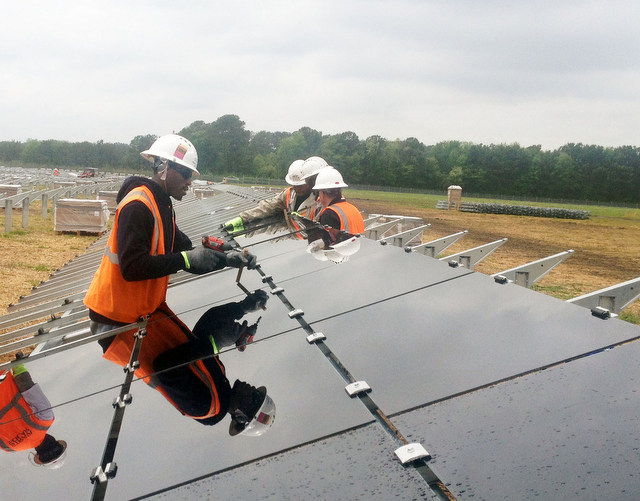 “Google was a driver behind Duke Energy seeking approval for the Green Source Rider,” said Rob Caldwell, senior vice president, Distributed Energy Resources. “Having Google as the first company to publicly announce its participation is extremely satisfying. We believe this will lead to similar announcements in the future.”

Here’s what Google had to say about the project on its blog:

As the largest corporate purchaser of renewable energy in the world, we (and our partners) want to encourage the countries and states in which we operate our data centers to add more renewable energy to their grids. To date, we’ve committed to purchase 1.2 gigawatts of renewable energy under long term contracts globally. The impact on emissions is the same as taking 590,000 cars off the road.

Enrollment in the Green Source Rider means Google will use renewable energy sources for a portion of the energy supplied to its expanded data center in the city of Lenoir. Under the program, Duke Energy and Google agreed on the specific project and additional costs associated with energy from the facility. Other Duke Energy customers will not pay for the project.

In 2013, Google announced an additional investment of $600 million to expand the Lenoir data center, and at the same time collaborated with Duke Energy to create the Green Source Rider program for large customers seeking renewable energy supply in Duke Energy Carolinas territory. Since that announcement, Duke Energy and Google have been working to execute on a renewable supply solution through the program.

Over the past eight years, Duke Energy has invested more than $4 billion in wind and solar facilities in 12 states. The company plans to invest about $3 billion in renewable energy over the next five years. Duke Energy is currently wrapping up a $500 million solar expansion in North Carolina, with the completion of four major solar facilities in Bladen, Duplin, Onslow and Wilson counties. Largely because of investment by Duke Energy companies, North Carolina is ranked fourth nationally for overall installed solar.