Solar funding in Q1: Totals way down year over year — so who closed deals?

Mercom Capital Group released its report on funding and merger and acquisition (M&A) activity for the solar sector in the first quarter of 2016.

“It’s a tough environment out there,” said Raj Prabhu, CEO of Mercom Capital Group. “Solar public companies in general have had a difficult time raising capital at depressed market valuations. Yieldcos, which accounted for significant financial activity in the debt and public markets last year, have faded this quarter. On the bright side, VC funding held up well, securitization deal activity picked up and residential/commercial funds raised a billion dollars in Q1.”

Most of the funding in the first quarter of this year went to solar downstream companies with $333 million in seven deals. The $300 million raise by Sunnova Energy accounted for most of the total. 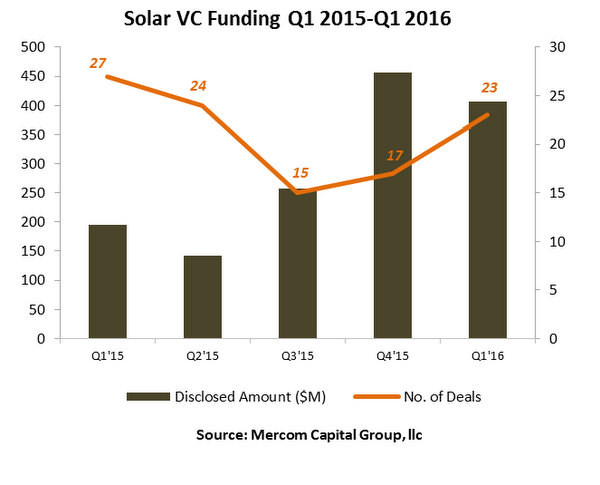 The next largest deal was TenKsolar with a $25 million raise. PosiGen raised $20 million and Mercatus brought in $11.7 million. Completing the Top 5 was NexWafe (a spinoff of Fraunhofer) which raised $6.7 million. A total of 19 VC investors participated in Q1 2016.

Public market financing activity fell of the cliff in the first quarter this year with only $94 million raised in four deals compared to $605 million in eight deals last quarter and $1.3 billion in 10 deals in Q1 2015. There were no IPOs this quarter, compared to three in Q4 2015.

Funding continued to pour into residential and commercial solar funds for lease/PPAs, with $1 billion in six deals announced in Q1 2016 compared to the $650 million in three deals in Q4 2015. Since 2009, approximately $18 billion has gone into residential and commercial funds.
There were 15 solar M&A transactions this quarter compared to 13 transactions in Q4 2015. Ten of the M&A transactions in Q1 2016 involved solar downstream companies. 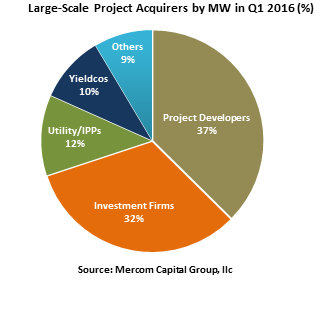 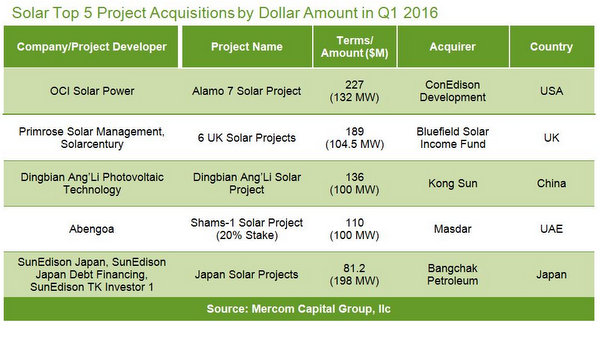