... Surge Protection: Why and How | Solar Builder

Surge Protection: Why and How

Surge protection is a small part of an overall PV installation, but it’s a part that can’t be ignored. Surge protection devices (SPDs) protect sensitive electrical equipment within the PV system from overvoltages that can lead to reduced life expectancy and sometimes failure. As solar farms continue to get larger, the risk of lightning and overvoltage situations expands. 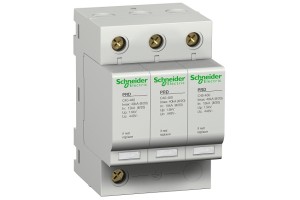 The first is a lightning arrester, protecting electrical installations against the effects of direct lightning strikes. Lightning rods atop buildings are good examples of this. The second category is a surge arrester/surge protector, which is used to protect electrical equipment against indirect lightning effects. These protect equipment from overvoltage driven by the conductors of the electrical distribution network.

Overvoltages can hit a PV system in several different ways: 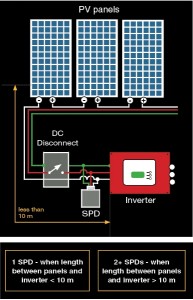 How many spds are needed?
The number of SPDs for a PV system depends on the distance between the generator (solar panels) and the conversion (inverter). If the length of cable between the panels and inverter is less than 10 m (33 ft), only one SPD is needed. If it is greater than 10 m, additional SPDs are needed.
The first SPD is installed near the inverter. A second SPD is connected closer to the panels.

Although relatively rare, modules can be destroyed by lightning hits. The best way to protect this from happening is using a lightning rod and an SPD. A small surge protection device can make the difference between success and failure of large-scale PV installations.