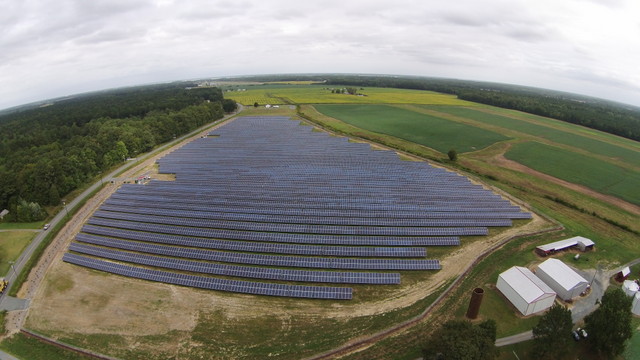 In 2012, the National Aquarium in Baltimore began exploring rooftop solar as a way to decrease dependence on traditional energy resources.

However, given the National Aquarium’s unique building design, rooftop panels were nearly impossible. The limited roof space could only accommodate a very small system, and its aging roof was soon scheduled for replacement. The Aquarium wanted to make a more substantial conservation impact, simultaneously securing long-term, fixed pricing on a significant portion of its renewable energy, while receiving renewable energy from its home state of Maryland.

Oh, what to do? Enter Cambridge Solar.

Located in Cambridge, Md., this 4.3 MW (DC) solar PV project was developed by OneEnergy Renewables and is a landmark in the evolution of renewable energy options in the U.S. It is comprised of 14,326 PV modules mounted on 47 rows of fixed-tilt racking structures and is expected to produce nearly 6,000 MWh of energy in its first year of operation.

The project will supply roughly 40 percent, or nearly half, of the Aquarium’s total electricity load and is a key component to the National Aquarium’s comprehensive conserva- tion plan. During the months of June, July and August 2015, the system generated over 1.8 million kWh of electricity, avoiding the creation of nearly 1,300 metric tons of carbon dioxide.

“We are proud to have collaborated with groSolar and Constellation to develop Cambridge Solar for the National Aquarium,” says Bill Eddie, president of OneEnergy Renewables.

Maryland-based construction company groSolar was selected to build the project. groSolar’s team of engineers, developers and construction professionals worked tirelessly to bring the Cambridge Solar project online, meeting deliverable dead- lines despite having to endure one of the most challenging winter construction seasons the area has faced in recent memory.

late December 2014. Starting a construction project in the winter presents its own unique challenges, but the site experienced increased mud and frozen ground given that it lacked naturally occurring drainage for excess rain accruals. Significant rain events throughout construction caused mud depths ranging from 12 to 30 in. across the site, severely challenging movement and traction efforts. To mitigate the lack of site drainage, groSolar’s team added an additional drainage location and pump station for effective installation of the electrical stub-ups and pads. While this particular site provided substantial challenges, groSolar’s innovative team expediently overcame major hurdles to deliver the project on time in early May 2015. 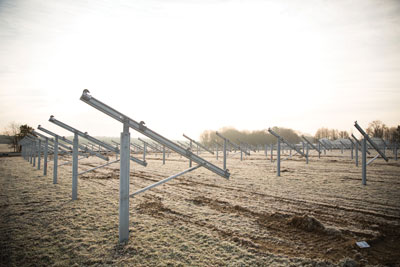 The site was level to the point that it lacked naturally occurring drainage for excess rain accruals.

We gave a nod to this project in our July/August issue (“Beyond the Rooftop: How Offsite PPAs are changing the game for solar profes- sionals”) because the project is one of the first of its kind to enable a leading non-profit institution to benefit from both the economic and environmental benefits of solar power.

A quick rundown of benefits:

• Long-term, fixed price energy procurement that supports sustainability commitments and goals aligned with the mission of the National Aquarium.

• Stable income for the landowner from what had been the least productive section of a large family farm, a farm that will be passed on to and operated by successive generations.

• A sizable contribution toward helping Maryland meet its renewable energy and solar targets under the state’s renewable portfolio standard.

OneEnergy Renewables customized the development of the Cambridge Solar project and transaction to meet the aquarium’s unique energy and financial profile, facilitating the National Aquarium’s procurement of fixed-price power with its energy provider, Constellation. The long-term power agreement enables the aquarium to receive a fixed price for electricity supply equal to the amount of power generated by the Cambridge Solar project (located roughly 50 miles from Baltimore’s Inner Harbor). Constellation owns and will operate the solar generation project for the entire term.

Overall, the project is designed to meet 40 percent of the National Aquarium’s electricity requirements.

In short, its fossil fuel dependence sleeps with the fishes.