2014 Ground-Mount Project of the Year Runner-Up: College of the Desert Carports

A 3.8-MW solar carport project spread across three parking lots is a big undertaking for any contractor, but especially for one with little carport experience. Oltmans Construction Co., a full service general contracting company specializing in commercial and industrial construction headquartered outside of Los Angeles, is no stranger to solar — its portfolio contains many multi-megawatt commercial rooftop projects. But its solar carport experience consisted of one 2.5-MW project for City of Industry, Calif.’s Metrolink station. 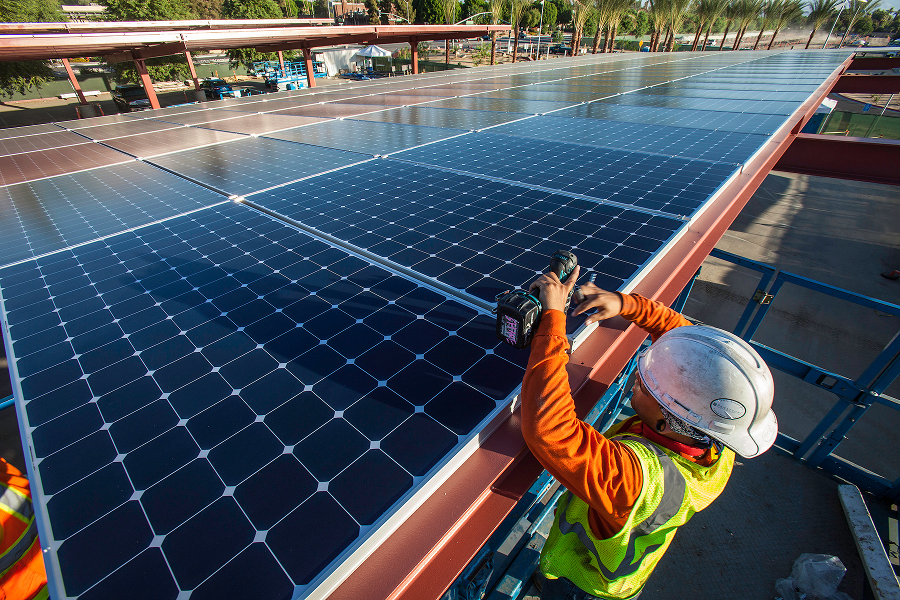 Still, when College of the Desert in Palm Desert, Calif., hooked up with SunPower for solar carport systems on its campus, Oltmans won the bid, and it definitely didn’t turn out to be a simple project. Oltmans’ ingenuity and flexibility when problems arose led to this project winning second place in the ground-mount category of Solar Builder’s 2014 Project of the Year awards.

The project first started with a tight construction schedule. In order to avoid student and class interruptions, everything had to be completed during the summer months of 2013. The SunPower-designed carport systems came with set installation plans, but Oltmans realized this project could not be completed on-schedule using SunPower’s instructions. So the crew had to alter the plans to speed up installation, says Mohammed Kabir, project manager for Oltmans.

“We came up with having a cold joint about a foot below grade,” Kabir says. “That basically will speed up the process — going from about eight to nine caissons a day to about 16 to 17 caissons a day. Usually when you do a monolithic pour, you drill one location, you set your tubes, you rebar — you basically pour the whole pedestal/caisson all at once. The amount of manpower needed to have the tubes in place, set the templates in place… then you have to let it cure, and then come back to set the anchor bolt template on top. 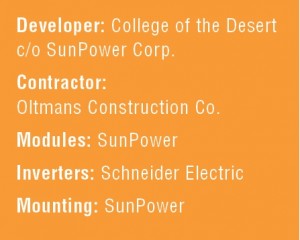 “Instead we drilled, set the rebar, poured concrete up to a foot below grade and let it sit,” he continues. “The drill rig came in — they were drilling, pouring and kept moving. By doing that, they were able to do about 17 columns a day. Since we were able to do this many in a short period of time, we were able to come back to the first column and then do the sandblasting and do the second phase of the pour. This significantly saved time.”

Since it was a Department of State Architecture (DSA) project, each design change had to be pre-approved by the department. Oltmans was already crunched for time, so the crew went ahead with its revamped installation plans before getting DSA approval.

“We decided we were going to move forward with it and take the risk [that] in the event the DSA doesn’t approve, we may have to go back and do something,” Kabir says. “We were done with 25% of the caissons before DSA came back that we were good to go.”

Oltmans caught a lucky break with the DSA. And then another issue popped up. 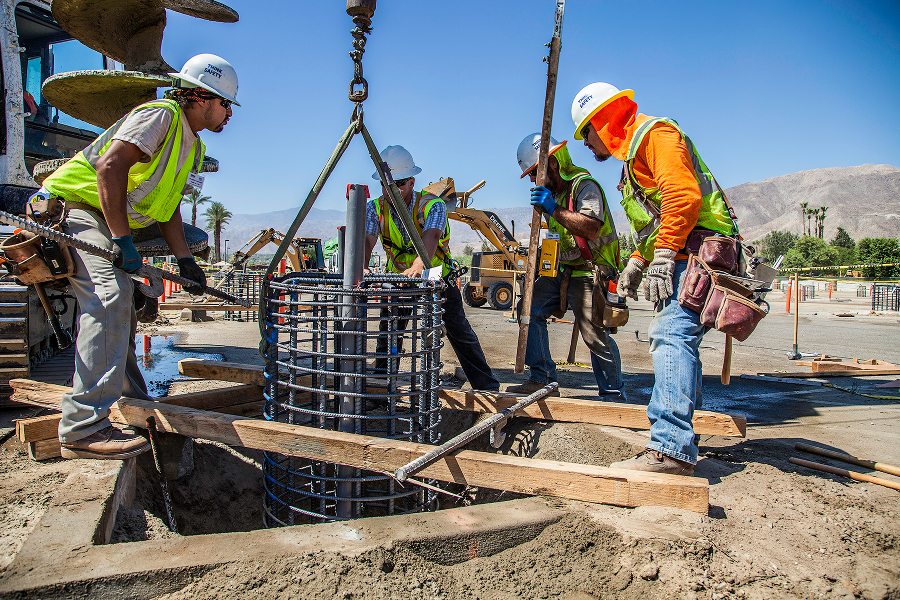 “About 60% through the project, College of the Desert threw a curve ball,” Kabir says. The college had a commitment with the community to rent its parking lots for weekend swap meets/street fairs. Instead of working straight through, Oltmans tweaked its schedule to install certain sections on weekdays and have everything cleaned up and secured in time for the weekends. The carports were installed throughout the summer to avoid students, but there was no getting around these weekend swap meets.

“We worked off in phases and we [sectioned] off each area, worked in that area, finished it and moved on,” Kabir says. “We did all the columns at once because there was trenching involved with that. We really couldn’t open it up as much. Then we did the rest in phases like putting the beams up, all the panels, all the wiring. We wanted to get the columns out of the way because if we wanted to keep the drill rig out there for that long or keep having to come back in phases, we would have incurred a lot of costs.”

“When you work with really old facilities, most of the drawings are really out of date,” Kabir says. “We had to pothole in a lot of locations. Where [the drawings] showed those existing pipes to be, they really weren’t there. We had to pothole and do a radar on those lines to figure out where they were.”
Looking at the project now, you wouldn’t know how much work went into installing all 8,800 SunPower modules across the three parking lots. Everything was cleaned up and finished for the 2013/2014 school year, and the 3.8-MW system officially came online in November 2013 and has been estimated to generate up to 66% of the total electricity consumed on campus.

Oltmans Construction is just happy to have this solar carport installation experience under its belt and to move on to the next project. 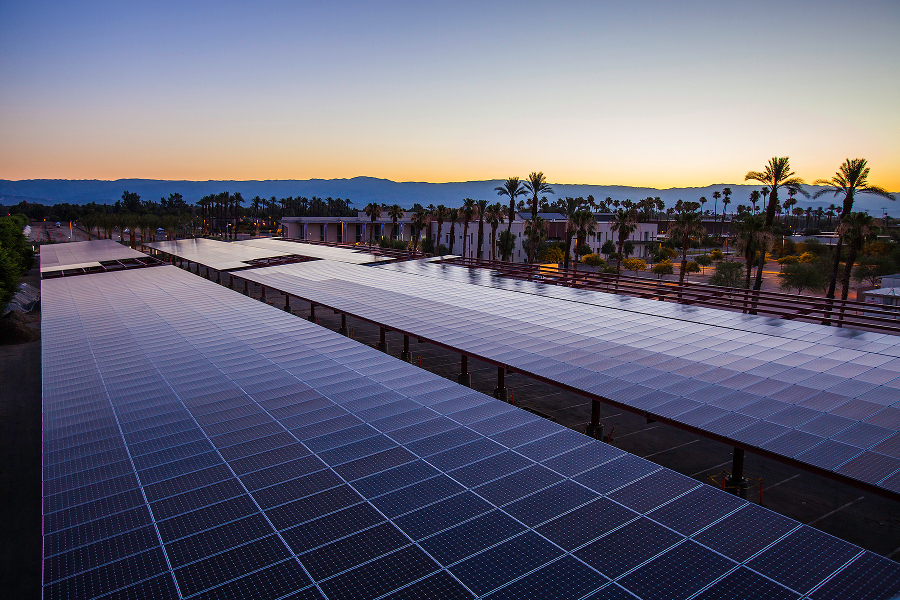