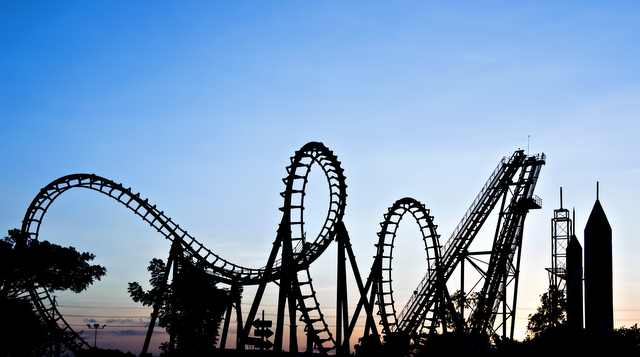 Not as fun as it looks.

The solar coaster feels like an apt description for the up and down nature of the industry except for the part where roller coasters are fun. The dips in the solar coaster are considerably less so. After cresting to the top of another climb in 2016 — passing the ITC, installing more solar than ever – we have now started that familiar descent of slower growth, trade pressure and insolvencies. Here are some of the most notable casualties so far.

The management board of Germany-based SolarWorld AG issued a statement that, after having conducted a diligent review, has decided to file for insolvency proceedings. The company came to the conclusion that due to the ongoing price erosion and the development of the business, it no longer has “a positive going concern prognosis,” is therefore over-indebted and thus obliged to make this move.

“In light of the foregoing, the management board will now immediately file for insolvency proceedings with the competent local court (court of insolvency),” stated the SolarWorld board.

SolarWorld was pushed to the brink several years ago because of similar pressure from Asian solar module manufacturing and sales practices, and the company fought for, and received, anti-dumping and countervailing duties against manufacturers in China and Taiwan in the U.S.

Since that time, according to GTM Research data, imports from China “have virtually disappeared in the past 2 years accounting for just 7% in the first two months of 2017” and Taiwan imports are all but gone. At the same time, U.S. manufacturing capacity has doubled. But now we see this was perhaps more of a Band-Aid over a much larger wound as market gaps were filled elsewhere. “Imports from Southeast Asia and Korea have skyrocketed, from 15% and 7% in Q1 2015 to 55% and 21% in Q4 2016 respectively,” GTM notes. As a result, despite the doubled capacity, U.S. share dropped below 15 percent overall while market prices fell drastically.

All of this international trade pressure seems to much for it to bear, at least in Europe. SolarWorld Americas Inc., based in Hillsboro, Ore., however, reports that it’s operating as usual and maintaining full operations. SolarWorld Americas, the largest U.S. crystalline-silicon solar manufacturer for more than 42 years, is continuing to implement efficiencies and working with external partners to position the company for stabilization and a continued competitive position in the marketplace.

“We deeply appreciate the ongoing support of our loyal customers in the Americas at this tumultuous time for the solar industry,” said Juergen Stein, U.S. president of SolarWorld. “Together, we are striving to maintain our leadership role in the U.S. solar manufacturing industry for years to come.”

Ten K Solar, a company that had a really intriguing system that we profiled here, says it will be “discontinuing its current operation” and terminating many of the services it formerly provided to customers.

The company seemed to be trending up after netting a single equity investment of $25 million from a group led by Goldman Sachs, but the solar coaster cares little for such things.

“The most recent 18 months have proven to be difficult for companies in the solar industry,” the statement said. “Ten K Solar has not been immune to those difficulties as significant price pressures and scale have proved a significant barrier to profitable growth.”

The company “has decided to reposition the business to live within the constraints of these marketplace realities.”
It’s unclear what that reposition will be and whether or not bankruptcy is on the table.

For more on the Ten K news, head to the Star Tribune.

This feels somewhat like standard operating procedure for all of the country’s largest solar companies, but SunPower reported continued losses in the first quarter of 2017 ($134.5 million) and forecasts more going forward (between $110 million to $135 million in Q2). Some of this, the company notes, is because it is switching up its business model, moving away from utility-scale to focus more on residential and commercial. While this makes sense given the bigger advantages to its technology in residential and commercial projects, those markets are softening. Also, its high-efficiency system advantages are seeing more competition from the likes of LG and Panasonic.

“Our revenue for the first quarter was lower than expected due to the extraordinarily wet winter in California, where we have a significant presence,” said Paul Nahi, president and CEO of Enphase Energy. “We started shipping our Enphase Home Energy Solution with IQ, our sixth-generation integrated solar, storage and energy management offering, in the U.S. at the end of the first quarter. We look forward to the U.S. launch of our integrated AC solar modules, developed with our partners, during the second quarter. These modules, which we believe are the future of rooftop solar, will include our sixth-generation microinverters, creating a simpler and more consolidated solution.”

Revenue expectations for the second quarter of 2017 are within a range of $72 million to $80 million.

The entire solar industry reported a down Q1, that most everyone is chalking up to bad weather, but some onlookers aren’t buying this as a sufficient explanation for Enphase’s quarter. From stock analyst website Seeking Alpha:

What makes this miss particularly ugly is that the Q1 guidance was given two months into the quarter and it was already well below expectations with management blaming rains in California as the main reason for the low guidance. With that backdrop, the miss of over 10% at the mid-point was exceptionally bad.