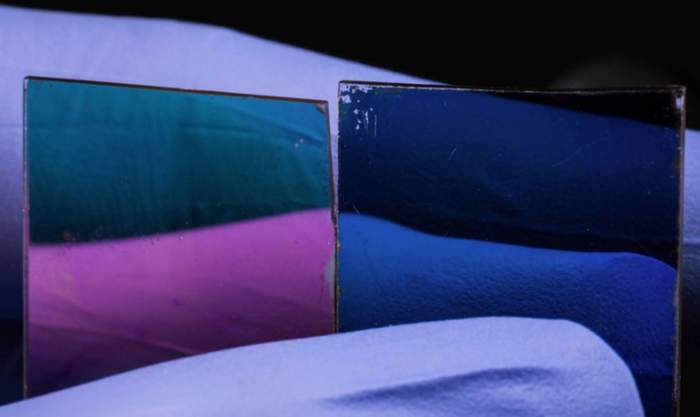 Researchers at Case Western Reserve University and the University of Rochester have developed a new class of optical coatings they say could make solar photovoltaic (PV) cells last six times longer, dramatically decreasing the cost of replacing worn out cells and ushering in a new era of high-performance, low-cost solar panels. This will take some time to develop, notes Giuseppe Strangi, professor of physics and Ohio Research Scholar at Case Western Reserve, but they have made an important first step in this new process of manipulating wave-optics at the nanoscale.

What the!  For more than a century, optical coatings have been used to do two things: reflect certain wavelengths of light from lenses and other devices or transmit them by allowing those wavelengths to pass through. They are an integral component in almost every optical instrument, from eyeglasses to telescopes to simple or very complex mirrors.

But the researchers said no optical coating had been developed that could simultaneously reflect and transmit the same wavelength, or color—until now. These new coatings can be made to fully reflect only a very narrow wavelength range that corresponds to the range which efficiently produces electricity by a PV cell.

Strangi and his collaborators created a coating made from a 15 nanometer-thick film of germanium (similar to silicon or tin)—that can do both with exceptional clarity. It is an advance in optical coatings that both Strangi and Guo said could lead to other applications.

“This is important because it opens up a whole, wide range of possibilities,” Strangi said. “We’ve done something that hasn’t been done in a century of development of optical coatings—and even we don’t know all of the applications that could come from this.”

The PV problem is two-fold: PV panels produce energy efficiently during day, when energy demand is relatively low, but not after sunset, when demand is high—before and after work. Additionally, storing energy generated from PV panels to overcome that dilemma is expensive. These new coatings, in addition to an ability to be fine-tuned to reflect the perfect PV wavelength, could also be made to absorb the rest of the solar spectrum.

That means they could efficiently transfer those particular wavelengths to heat. And storing that thermal energy is relatively inexpensive, compared to storing electricity. This approach would also protect the PV cell from overheating, leading to the promise of that six-fold increase in how long PV cells last, Strangi said.

Strangi worked on the project with Mohamed Elkabbash, a Case Western Reserve alumnus now a post-doctoral researcher at MIT, Mike Hinczewski, associate professor of physics at CWRU, and Chunlei Guo, professor at Rochester’s Institute of Optics.

Their work is detailed in a paper in the journal Nature Nanotechnology.