An obstacle in the way of massive solar growth around the world is having the capacity to meet the demand. The solar photovoltaic (PV) manufacturing sector is ready to meet this challenge as it looks to increase capital expenditure (capex) on new factories and technologies in 2016 by more than 60 percent, compared to 2012, when manufacturing capex fell to a six-year low.

Manufacturing-related investments are forecast to reach a five-year high of $5.3 billion in 2016, according to the new PV Manufacturing & Technology Quarterly report from the market research division of Solar Media Ltd.

The growth in solar PV manufacturing capex is being driven mainly by two factors: the requirement to upgrade the productivity of existing solar cell production lines to increase solar module power ratings; and the need for Chinese suppliers to locate solar cell and module capacity outside China to fully capitalize on overseas end-market demand growth.

“Capex from leading solar cell manufacturers in 2016 has strong contributions from factory expansions and technology upgrades, with much of this occurring across Southeast Asia,” said Finlay Colville, head of market intelligence at Solar Media Ltd. “Manufacturing in Southeast Asia allows Chinese-based module suppliers to ship product to the U.S. market, exempt from import tariffs.”

Capex during 2016 is forecast to be dominated by spending at the solar cell stage of the production value chain, at $2.1 billion, or 40 percent of overall manufacturing capex for the year. As the key driver in solar panel efficiencies and power ratings, solar cell capex is seeing increased activity from new and advanced technologies within cell production lines. 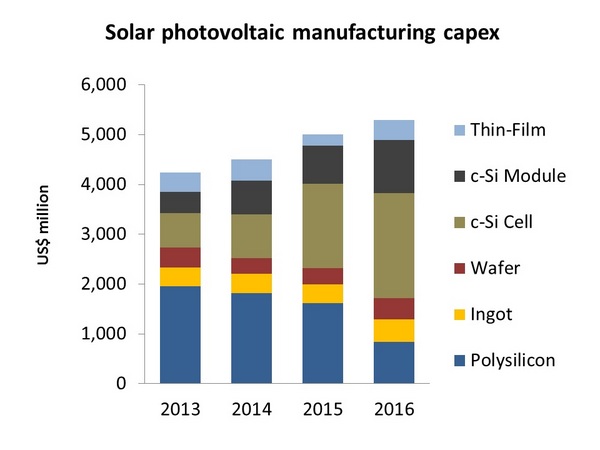 “Technology-based equipment spending by solar manufacturers was severely impacted between 2012 and 2014, when many of the leading companies reacted to falling end-market module pricing by diverting resources to cutting costs and reducing utilization rates in factories,” noted Colville. “With manufacturing margins returning to the 10-20 percent level, this has released capital to re-invest in technology improvements, while at the same time expanding overseas capacity.”

Approximately 25 percent of solar PV capex in 2016 is forecast to come from a select group of Asian manufacturers, comprised of Canadian Solar, Hanwha Q CELLS, JA Solar, JinkoSolar, and Trina Solar. Capex from these companies is also driven by increased annual module shipment targets, with Canadian Solar, JinkoSolar and Trina Solar emerging as the three largest module suppliers this year, each expected to ship about 6 gigawatts (GW) in 2016.

“The leading candidate for technology upgrades across the dominant silicon solar cell stage of the value chain in 2016 is a process known as passivated emitter rear contact cell, or PERC,” added Colville. “PERC upgrades have the potential to add 10-20 watts in panel power ratings, and are being implemented by many of the Asian producers this year, with Hanwha Q CELLS emerging as the leading proponent for this new technology type.”