The two leading thin-film solar manufacturers, First Solar and Solar Frontier, represent a combined manufacturing capacity of 4 GW. While they do not pose a short-term challenge to crystalline silicon players’ market dominance, ongoing innovations will ensure thin-film remains a significant player, according to Lux Research.

Of the two, First Solar is far bigger, with expertise in utility-scale systems and a new large-format module design that will help maintain its gigawatt-scale presence in utility-scale systems, as deployment grows in emerging markets. Solar Frontier has gradually diversified its business away from its home market of Japan and is making steps towards a rooftop building-integrated photovoltaic (BIPV) product. 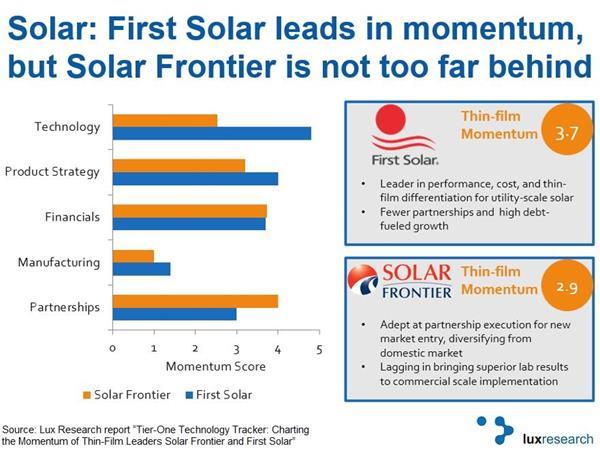 • First Solar ahead on momentum. In Lux’s momentum analysis, First Solar had a score of 3.7, out of five, moving faster in technology progress and executing a competitive product strategy. Solar Frontier scored 2.9, moving adeptly into new markets through partnerships, while keeping pace in its financial position and manufacturing.

• Solar Frontier capitalizes on niches. Solar Frontier is taking steps toward a BIPV product, with preconfigured systems, flexibility and novel form factors. These are small differentiations in its current rooftop market, but can provide the groundwork for a larger BIPV industry with Solar Frontier at the helm, potentially a huge payoff.

• Challenges lie ahead for both. First Solar’s further growth hinges on plant-wide adoption of its Series 6 module and achieving systems costs below $1.00/W. Solar Frontier’s future rests on its ability to move its success in the lab to commercial production, and a partnership with a storage provider to integrate a lithium-ion battery option with its residential systems.

Thin-Film in 2016: Don’t look now, but thin-film PV is positioned for growth