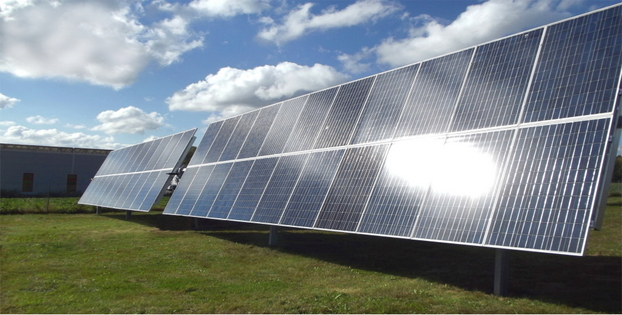 With a maximum capacity of 78.6 square meters, the DEGERtracker S100 provides system integrators and designers with excellent flexibility for solar modules and is designed for wind speeds up to 110 km/h. By using a maximum east/west rotation angle of +/- 50° and the patented MLD (Maximum Light Detection) sensor, the single-axis tracking system aligns photovoltaic modules automatically to the best generation angle, giving the DEGERtracker an advantage of up to 30 percent higher yield on average than fixed tilt systems.

RELATED: We look at the value decentralized tracker systems bring to a project

Newly developed, the DEGERtracker S100 has implemented a special worm gear rotation system that has even lower energy-consumption than the previous models of the S-series. To protect the system in the event of storms, the wind guard moves the modules of the DEGERtracker into the horizontal position during high winds to minimize the possibility of damage to the modules surface.

With the efficient design of the DEGERtracker S100 including pre-installed wiring to the controller, the assembly was simplified, and the installation time has been reduced by a significant degree. The DEGERtrackers are not linked to each other and due to a robust and long-lasting bearing the maintenance and operation costs of the tracking system are very low.

Each DEGERtracker is equipped with a patented MLD sensor from DEGER. The MLD technology continually measures the intensity of light and moves the solar module installation into the most advantageous power generating position. The tracking system uses direct solar irradiation as well as reflected energy from rocks, snow and diffuse light.

Due to the intelligent tracking of DEGER, only those movements that will result in a direct yield increase are carried out. Because of different levels of cloudiness, the light conditions in solar parks vary for each DEGERtracker. The individual control makes sure every DEGERtracker is optimally oriented to the brightest source of irradiation. This guarantees a yield up to 30% higher than fixed tilt systems. Special features such as automatic eastern reset of the DEGERtracker overnight and the optionally available snow sensor, provide superior power generation performance, for a shorter investment payback period.

DEGER’s market position is based on the unique, patented “Maximum Light Detection” or MLD technology. The MLD-sensor constantly aligns the connected solar modules to the point that provides the greatest energy and achieves a 45% greater yield on average than fixed systems. With more than 75,000 projects installed in 58 countries, DEGER is world’s market and technology leader for tracking systems.

DEGER was founded in 1999 in Germany. In 2005 DEGER opened its first branch office in Spain, in 2009 the branch office in Greece followed. In 2011 a branch office was opened in Australia, 2014 in South Africa and 2015 in Canada, Egypt and Turkey. DEGER produces in Germany, Turkey, Canada and South Africa. On request, DEGER offer assistance in project financing and EPC businesses.