Spread the Wealth: We look at the value decentralized tracker systems bring to a project 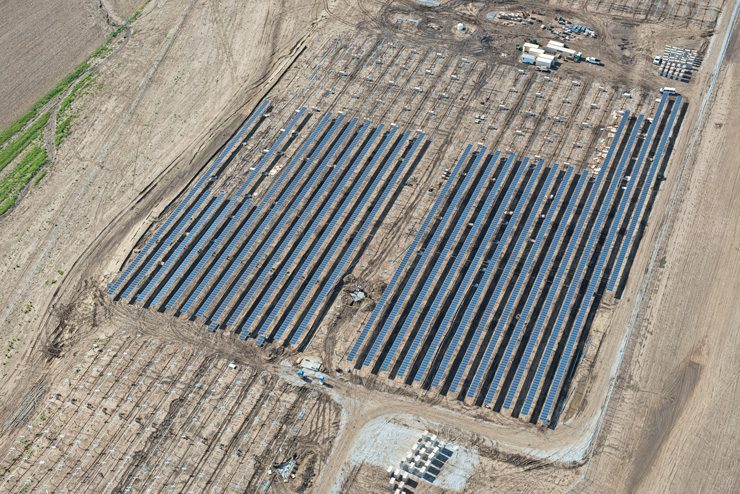 Solar FlexRack’s TDP Turnkey Tracker is best suited for the 1- to 10-MW project sizes, like this 5-MW project in Nebraska.

Designing and building the perfect site is all about knowing your options. In the ground-mount C&I and utility-scale world, those options keep expanding. The latest system design to gain steam is the decentralized tracker, which gives each row its own ability to track the sun and optimize energy harvest independent from every other row.

Some of the benefits of a decentralized tracking system are obvious immediately. Without a central driver, the space between the rows is now freed up for vehicles and mowers to pass all the way through without needing to turn around. Independently driven rows can move in opposite directions, which is handy for tilting two rows to face each other to clean them both in one pass. Dan Shugar, CEO of NEXTracker, one of the first companies to come out with a decentralized system, estimates that site cleaning and vegetation management is four to five times quicker by just removing the turnaround time.

Removing the central drive component also removes every installation and maintenance consideration regarding that component, such as re-greasing universal joints and inspecting fastener connections. More importantly, it fundamentally changes project layout and site preparation. NEXTracker, for one, eliminates the labor for mechanical installation of a driveshaft, eliminates AC power wiring and often communications wiring from the inverters to the tracker motors.

“It eliminates having to dig trenches for the AC power and communication wiring,” says Shugar.

“Another advantage to the decentralized system is that less steel is needed to move panels over a larger area,” says Steve Daniel, EVP, sales and marketing for Solar FlexRack, which debuted its TDP Turnkey Tracker this year. “Each motor of a decentralized system moves roughly 60 to 80 panels all on one table, and no mechanical connections are needed between trackers.”

This inherently provides more flexibility to site design and panel arrangement, allowing trackers to be installed in sites that have irregular shapes or obstacles, not to mention better on-site installation flexibility. As plans change (because plans always change), the entire project won’t be thrown off. Losing the central drive can also translate to more panel density. Shugar says up to 30 percent more PV can fit on a site with distributed rows.

“The decentralized design also allows developers to maximize land usage by being able to properly position the individual tracking units on the site for the most optimal site layout,” Daniel says. “On some sites, this means more megawatts per acre and lower land cost.”

Decentralized trackers also don’t require the site grading needed to accommodate that centralized drive, which usually makes them a better fit for a steady slope, but Andrew Worden, CEO of GameChange Solar, warns against getting too carried away with a decentralized system’s layout flexibility.

“You’re still going to want a good run on the torque tube of 200 feet, and putting that on a slope, I don’t care how you do it, it’s going to be a pain in the neck,” he says. “So, yes, it is better on rolling or sloping ground, but honestly I don’t think it’s great to put trackers in that situation. If you have ground sloping in a steady grade then it’s great.”
The new Genius Tracker from GameChange even comes with lateral capture devices that keep tubes from rolling down a hill.

Undulating ground makes things difficult because there will be uneven shading from row to row. With distributed drive, in theory, you could then go back and reprogram the controllers to try and account for all of the different shade scenarios, but you have to decide whether all of that hassle is worth it.

Daniel points out that all of these differences between the tracker systems and just the general advancement of the technology is now expanding the sites for which trackers make sense. He sees more tracker systems being deployed on 1- to 10-MW projects, with specific vertical markets like distributed generation, agriculture, community solar and schools and municipalities becoming much more realistic segments for tracker systems than ever before.

“Trackers are being looked at more seriously in colder climates and other geographic areas where they were never before considered feasible,” Daniel says. “The advancement in technologies and the reliability of the tracker units coupled with a better understanding of the long-term advantages of these solutions is continuing to drive this growth.” 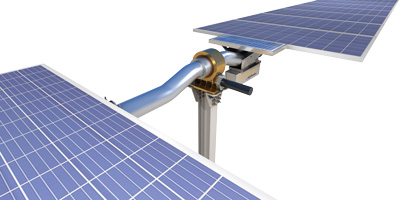 NEXTracker’s design is mechanically balanced to eliminate torsional load on the drive.

Like anything else, to gain additional benefits, you are going to incur costs in other places. Where there once was larger motors and computers driving a bunch of rows, there are now a bunch of motors and computers and batteries scattered throughout the site. This can add more costs to the system side of the ledger. You now also have more components that need monitored and kept running at optimal performance. Does the additional energy harvested and the O&M savings counteract those costs?

Worden thinks the value proposition typically favors the distributed drive system. Part of that is the O&M. He says the faster cleaning and vegetation management carries a 20-year net present value (NPV) that can exceed $0.03 per watt. The other part is the smaller intermittant performance loss vs. the risk of larger performance loss.

“Say you have a 100-MW project and have 300 central drive systems. In a distributed drive, you’d have 5,000 distributed drives,” Worden says. “That’s 300 big ones or 5,000 little ones. If you see one out of 5,000 little ones out, the performance loss is really a rounding error. It’s out for a day and fixed, but you do see it. But if one of 300 is out, you’re talking one-third of a percent for a day. Statistically though, the chance of seeing one of 5,000 down is 15 times higher. So, no matter how good you are, there is a chance things happen. Things get bumped; wires get nibbled on. We don’t have wires in the ground anywhere, so stuff still happens.”

Solar FlexRack estimates production losses from the failure of one decentralized unit at around 20 to 25 kW and an inoperable centralized unit at a loss of up to 1 MW of production. Daniel also believes keeping the wires above ground is a good thing and adds to the incremental value proposition over the life of the distributed drive because the main potential failure components are easily identifiable, accessible and replaceable.

“With all the rows of the tracking system easily accessible for every panel, motor and controller, this makes for efficient long-term cleaning and repair — if necessary,” he says. “It is also very easy to replace components on a decentralized system as most are lightweight, relatively low cost and, depending on the supplier, they may even be commercially available, off-the-shelf components.”

For example, if a motor needs to be replaced on a system that is powered by a linear actuator, the entire actuator can be swapped out in less than an hour and the cost of the part will likely be under $200. 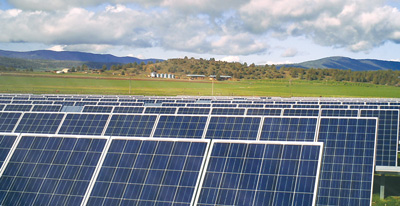 As added value, GameChange Solar is doing tracker project commissioning for free during the next year.

The newness of this tracker segment can be problematic for both buyers and manufacturers. Buyers don’t have the background to know when a decentralized tracker makes sense or what to look for in a system; and vendors might not have worked out all of the kinks just yet.

Here are some features to consider in a system:

Decentralized systems utilize motor power on each row. How much motor power is required and will there be any parasitic loss, either on the AC or DC side?

Decentralized systems should be designed to minimize the torsional forces on the row’s drive components by mechanically balancing the weight of the PV modules with respect to the rotational axis.

Since each row must carry its own motor drive/controller, rows should hold as many modules as possible in order to amortize those costs (while minimizing overall steel content) or minimize the amount of space lost to that drive/controller.

How easy is it to install? How well does the vendor manage logistics and delivery?

Has the vendor done damping analysis? A system’s intrinsic damping will tell you how wiggly it is, essentially. If the wind blows just right and the system wiggles in a certain rhythm, “the thing will just blow up,” according to Worden. Low intrinsic damping will require other components, such as shock absorbers at the ends of rows.
Understand the company behind the product. What is the warranty? What type of testing has been done (wind tunnel, UL, third-party verification, etc.)? What is the reliability of the main components of the system and how easily can they be replaced if needed? What additional services come with the product (design, installation, support)?

Also, a system is more than just great tracking technology, cool software and easy installation. A supplier with a background in the fundamentals of fixed-tilt systems can be a bonus because the basics of mounting a PV system and accounting for wind loads, ground conditions, etc., are still super important.

To sum it all up, the message here is know your options. For the right site, a decentralized tracker could increase the value of a project for both you and your customer.