A New Connection: How the cell-optimizer, string inverter combo could change PV systems 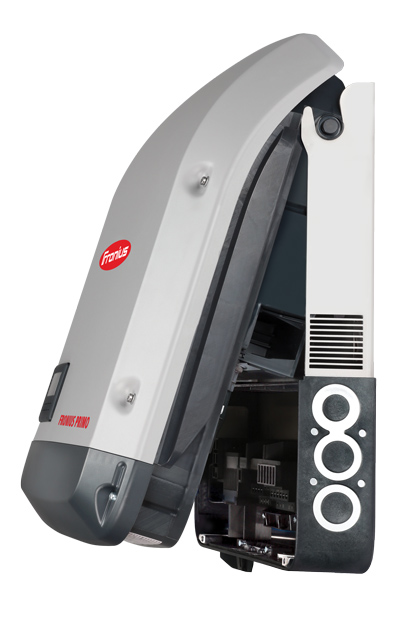 Life is all about making connections. You never know when that former grade school pal will suddenly pop back into your life and cut you a good deal on car insurance (thanks, Joey), or, more relevant to this article, when two international companies form a close working relationship in one industry that, down the line, leads to a game-changing combo in another.

What are you talking about?

What I’m talking about is a collaboration between Fronius and Maxim Technology on a string inverter, cell-level optimizer pairing that could upend the module-level electronics marketplace.

You know Fronius, one of the top manufacturers of string inverter technology in the solar industry, but you may not know Maxim, which develops all kinds of things on the downlow for the automotive, industrial, healthcare, mobile consumer and cloud data center markets. What it has developed for the solar industry is an optimizer that goes one step further than traditional module-level power electronics (MLPE) and is installed directly into the PV module (a chip that replaces the diode). The installer can simply wire this system with a string inverter as they normally might and achieve full optimization, MPPT and rapid shutdown compliance.

This Maxim PV optimizer technology is inverter agnostic, but the company closely developed the solution with Fronius because of their long relationship working on Fronius’ line of welding equipment.

“Both companies have the same approach when it comes to simplicity of solutions, advanced technology and making things easy for the user and installer,” says Richard Baldinger, head of marketing and pre-sales, Solar Energy Division, at Fronius USA.

Developing and testing an integrated system like this yields greater efficiency overall by removing communication issues and nuisance tripping issues that Tristan Kreager, director of solar energy at Fronius, says are common between third-party optimizers and inverters.

Tell me more about the tech

The upside of adding traditional module-level optimizers to a PV system is to keep it performing as it should by minimizing losses due to shading, while also adding in a layer of safety and compliance with NEC Rapid System Shutdown. The downside, though the technology has greatly improved over the years, is still its unreliability.

The value proposition of this system is achieving all of the upside of MLE with less reliability risks.

“From the testing we’ve seen, modules that are partly shaded over the course of the day, we see up to 50 percent more energy harvested from these systems versus those with traditional optimizers given the same circumstances,” Baldinger says, which highlights the value that comes from string architecture.

The Maxim technology, over time, could change the value of high-efficiency modules too. Certain mono PERC modules, for example, are prone to hotspots, which can counteract their added efficiency value. Incorporating cell-level optimization would remove that issue. Really, Maxim isn’t a replacement for an optimizer; it drops into the system as a replacement for the diode.

“It makes a more reliable panel, better quality and provides a solution to all the regulatory limitations with NEC Rapid Shutdown,” says Guillaume Casanova, director of product management at Civic Solar, a solar distributor that is particularly excited about this solution. “The failure rate would depend on the module manufacturer, the cracks in their cells or at the inverter level.”

What this means for installers

If shading can become a nonissue, designing a system just got way easier. You don’t need to worry about row spacing or how that nearby tree is going to grow and change from season to season or year to year.

No two solar installs are ever really alike, but with this Maxim/Fronius partnership, the opportunity exists to get as close as possible. Casanova says the solar installers who could receive the most benefit from moving to this system are those with large fleets, cranking out a bunch of jobs per week.

“One of our largest customers loves this solution because it not only provides an option for shade mitigation, but it reduces the labor involved with installing these,” says Owen Fox, product manager at Civic Solar. “They are a big residential installer in their area, and now they don’t have to design the system based on the optimizer, they just have to design it based on how many modules are being put on the roof.  That’s a hidden cost in delayed projects.

They are also happy to not have to install anything more with the module.”
As an example, that installer says it commissioned a 93-kW commercial system — 352 modules and six Fronius inverters –– that took 11 days to install.

Bottom line, whether it is person-to-person or module-to-inverter, connections matter, so be sure to evaluate your operations and see where new connections might benefit you and your customers.

Hey, this article is from our January/February 2017 Innovations Issue. The digital edition is out now. Sign up for your free subscription here, or splurge for the (also free) print edition to pass around the office.