Zoos do more than just offer a central place to see unique and exotic animals in replicated natural habitats. They are also proponents for conservation and research of animals and the planet we all share. The Toledo Zoo in Northwest Ohio is dedicated to caring for its animals — those from the Arctic, the African Safari and rainforest and desert spots in between — and expanding its green practices. The zoo installed a set of solar canopies totaling 98 kW over the walkway to its main entrance in 2010 to test the waters on how renewable energy could help its cause. But its second project, 2.1 MW completed in June 2014, really made a splash. So much so that Solar Builder readers praised its application and community impact and chose it as 2014’s Project of the Year winner. 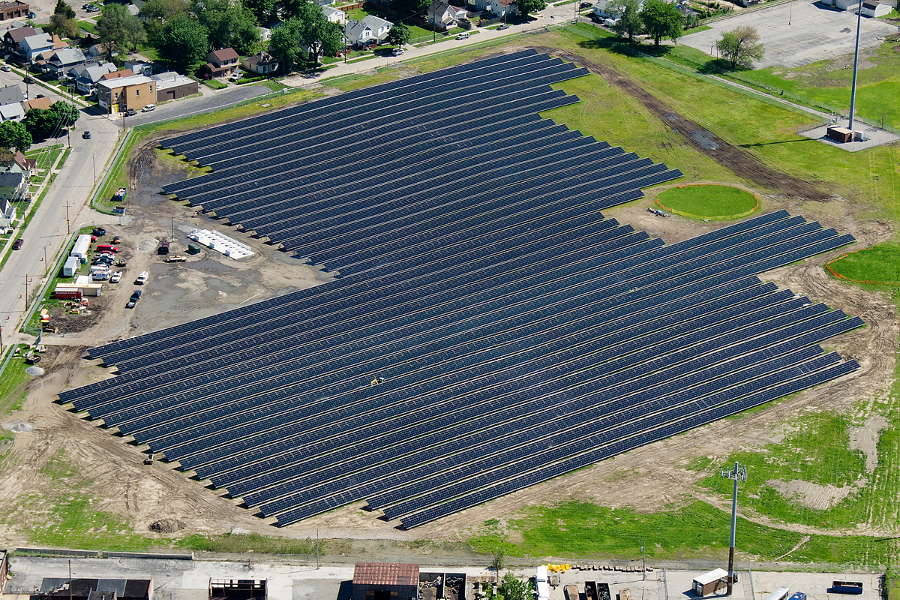 “Practicing the wise use of our natural resources through green alternatives such as the solar array is an important component of our mission: Inspiring others to join us in caring for animals and conserving the natural world,” says Jeff Sailer, executive director at the Toledo Zoo.

The zoo partnered with local contractor GEM Energy (of the Rudolph/Libbe Companies) again for this larger solar project (GEM Energy installed the entrance’s solar canopies four years previous). Jason Slattery, director of solar for GEM Energy, knew the zoo was interested in additional sustainability projects, so he and his team presented the idea of an off-site solar array.

“Of course, they were interested in it because the way we structured it allowed them to not have to spend any of their own money to develop the project,” he says. “There were two sites that we weighed the pros and cons on. Both of them were brownfields, both were directly adjacent to the Toledo Zoo, so they were both a good fit.” 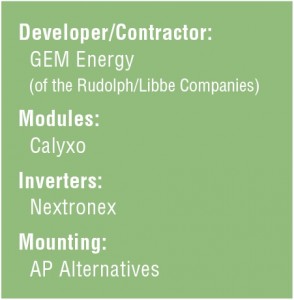 Eventually GEM Energy decided on a 22-acre plot off of Anthony Wayne Trail, not even a half-mile from the zoo. The site was a stranded property that had been in bankruptcy for half a decade. The land had once thrived as the manufacturing headquarters for Haughton Elevator Co., which occupied the site for 73 years before it was shuttered in 1989. The brownfield-classification of the site was largely due to bulldozed buildings and abandoned debris, including concrete the size of small cars.

“When we installed the array, each time we penetrated the subsurface, we had a failure rate on our post 25% of the time,” Slattery says.

The site also had chemical contamination with higher than normal levels of lead and arsenic. Through multiple environmental studies, GEM Energy developed a work plan that allowed for successful digging and trenching with no risk to human health.

“We worked pretty closely with the University of Toledo, the City of Toledo and the Ohio Department of Natural Resources to create a landscape plan to put native species of plants and vegetation on the site that will improve the soil quality of the site,” Slattery says. “You’ll find native species that are both aesthetically pleasing throughout the four seasons of the year and survive and thrive in those poor soil conditions. They will over the course of time leach some of the contamination up through the ground and bind it in the organic layer.”

The native plants also act as a buffer zone between the different types of properties nearby. Residential homes are right across the street with some commercial buildings just down the road. The plants act as a visual barrier between these mix-use areas and are a huge step up from the eyesore the site used to be.

The construction crew used a tractor equipped with GPS and a gyroscope to speed installation and lessen some of the site-prep. 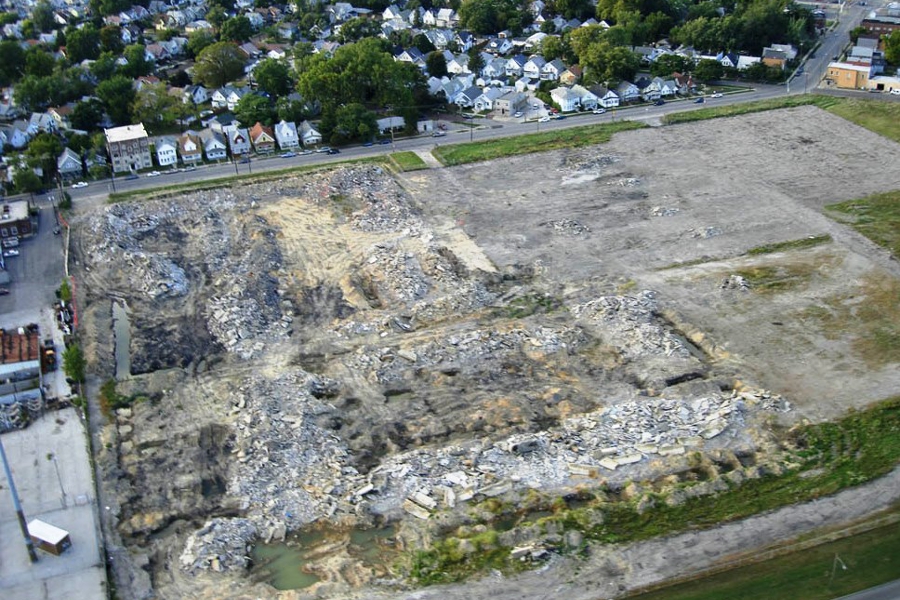 “Rather than moving dirt and leveling sites as flat as a pancake, you’re able to take what you get and install a solar array with minimal site-prep,” Slattery says. “In the past, we had to have a very level, graded site. Now we can go over rolling terrain, and that piece of equipment will keep it level and plumb and true.”

GEM Energy is also a big supporter of prepanelization.

“That’s our secret sauce,” Slattery says. “To control the schedule and costs, we call it an automated install process — we prepanelize all the components, or some of the major components, off-site. We do that in an enclosed warehouse that is not weather-dependent. It’s a mini-erector set. We wire all the solar panels, attach them to the racks, palletize it, put it on a truck, bring it on to the site, then use equipment rather than bodies on the ground to touch it. We’re able to basically bring it out in big Lego blocks and set it in place rather than stick-build it on-site in all kinds of weather.”

GEM Energy always aims to partner with local solar companies on its projects. This project for the zoo consisted of 2.1 MW of Calyxo solar modules (manufactured in Germany but use thin-film technology developed in Perrysburg, Ohio), Nextronex inverters and combiner boxes (based in Toledo) and AP Alternatives racking systems (headquartered in nearby Ridgeville Corners, Ohio). 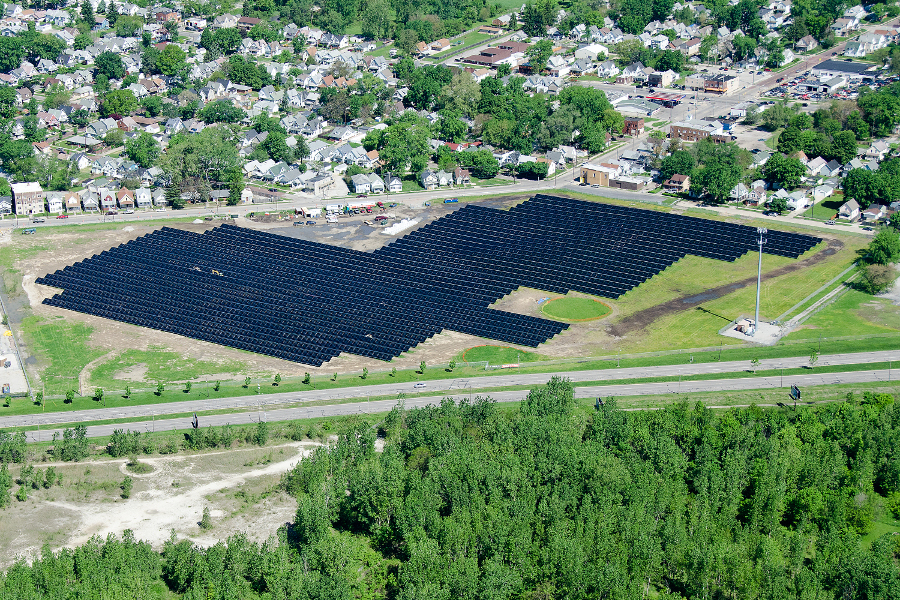 “Any time we can use anything local, we will,” Slattery says. “As well as the man-power to construct the project — that was all local to Northwest Ohio and Southeast Michigan.”

GEM Energy is a fan of thin-film modules, especially for use in Ohio’s cloudy environment.

“We think it’s a good technology fit for that particular site and that energy function,” Slattery says. “It marries well to the distributed architecture inverters through Nextronex. It’s a good meshing of technologies.”

The Anthony Wayne Solar Array was split into two 1-MW phases. The first started in Oct. 2013 and was online by the end of December. The second started in March 2014 and finished in June. The array will help with the zoo’s ever-growing electricity costs.

“It’s anticipated that the solar array will provide about 30% of the zoo’s annual electric power supply while simultaneously not exceeding the current cost of grid power,” says Rick Payeff, director of facilities at the Toledo Zoo. “In addition, GEM Energy was able to provide this green energy alternative without any additional capital expenditures on behalf of the zoo — a win-win situation.”

Slattery says the success of this project is owed to the City of Toledo and the public/private partnership established.

“The city administration, everyone from the mayor’s group all the way through City Council, they all came together and they were all super supportive of making this project happen,” he says. “They went to bat for us. That’s a good example of how the public sector works with the private sector to make economic goodness. Otherwise, this site would have been sitting there still today. Nobody could build on it, accumulating a negative tax liability every year. Now the site’s been repurposed and it’s a functioning contributor to the Toledo Zoo and it’s not an eyesore that people drive past every day. They can actually see something, and it has an educational benefit to it. It’s a huge win for Northwest Ohio.” 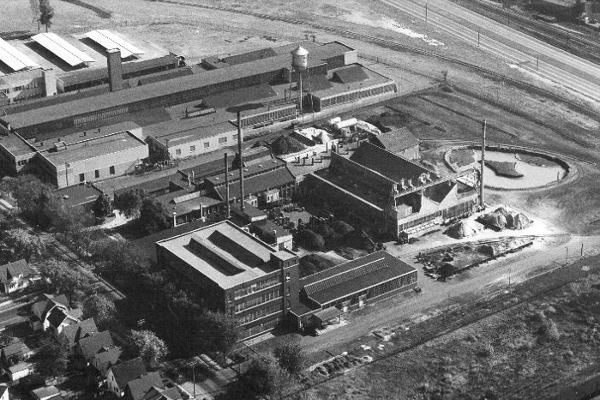 From Elevators to Energy: Before becoming home to 2.1 MW of solar energy for the Toledo Zoo, the plot of land housed Haughton Elevator Co., which was founded in Toledo in 1867. After moving to the site near Anthony Wayne Trail in 1916, it was the third largest elevator company in the country — behind Otis and Westinghouse. Eventually it was acquired by Schindler Group before the company closed the doors to the 250,000-sq-ft headquarters and plant in 1989.
Photo source: Haughton Elevator Co. Facebook page