The ‘Carportunity’: How our electric vehicle future means big things for solar carports

A new study from the U.S. Department of Energy’s National Renewable Energy Laboratory (NREL) quantifies how much charging infrastructure would be needed in the United States to support various market growth scenarios for plug-in electric vehicles (PEVs). NREL notes that most PEV charging occurs at home, but widespread PEV adoption would require the development of a national network of non-residential charging stations. Strategically installing these stations early would maximize their economic viability while enabling efficient network growth as the PEV market matures. NREL says about 8,000 fast-charging stations would be needed to provide a minimum level of urban and rural coverage nationwide.

No one asked us, but we think carport developments have a big opportunity (a carportunity!) to lead the way. The segment is seeing notable reductions in system costs and installation timelines that only make more projects viable.

The Value of Expertise

There is enough institutional knowledge among the chief carport construction companies now to give developers and larger investors confidence. Feast your eyes on California’s Franchise Tax Board complex, for example (pictured above). Developed by DGS-Building Property Management and installed by Ecoplexus at one of the largest business campuses in northern California, it is the state’s largest carport installation (10,400 PV panels), covering 1,276 employee parking spaces, spanning over 622,000 sq ft and generating 3.6 MW.

The project was made possible because of Baja Carport’s specialization in pre-engineered, pre-fabricated high-tensile, light gauge steel structures. And in chatting with its team at SPI this year, we’ve learned the company has been able to further streamline the costs of its system. 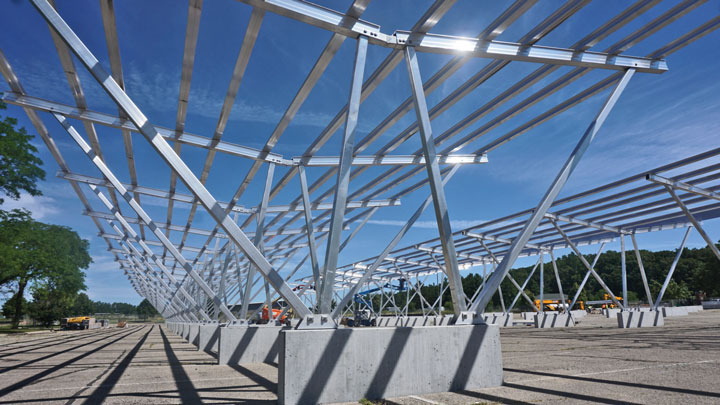 Then there is 4 S.T.E.L. and its standardized processes. Carport projects involve a ton of engineering and civil approval. 4 S.T.E.L.’s staff of engineers, project managers and drafters can design and erect a carport in their sleep at this point, but the big value comes in swift preapproval of its designs with the California Division of State Architects among other strict jurisdictions and building departments. Design preapproval can literally shave months off certain project timelines.

Carports are certainly spreading beyond California too. At Michigan State University (MSU), Inovateus Solar is nearing completion of a 14-MW solar carport project spanning five parking lots and 700 sq ft on the East Lansing campus (pictured below). Using Schletter’s Park@Sol concept, the design is a maintenance-free, lightweight aluminum system with canopies standing 14-ft tall at the lowest point to provide enough room for recreational vehicles to park during football season. The carport install is expected to generate 15,000 MWh of electricity annually for MSU with projections showing a savings of $10 million in electricity costs over the next 25 years.

Key to the Schletter approach is its Micropile foundation, a hollow metal rod installed deep into the ground (pictured to the right), that requires less concrete material to accomodate even high wind and snow loads.

“The technology innovation of using Schletter micropiles as foundations and precast concrete pads, in addition to the engineering design, cut the construction schedule in half and minimized the risk factors in a rainy environment like Florida,” said Javier Latre Gorbe, VP of Technical Operations for ESA Renewables. 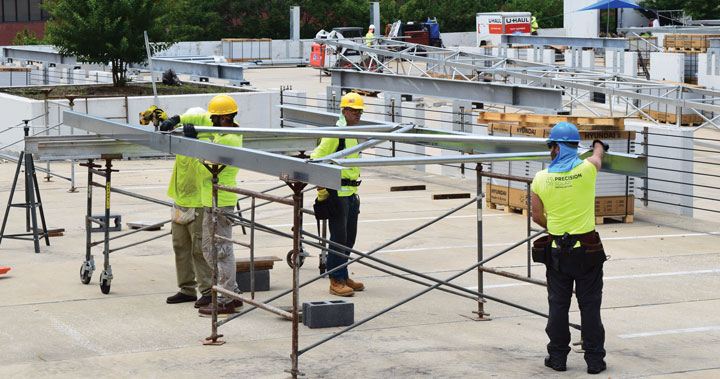 A newer entrant into the carport system space, Quest Renewables, has an especially exciting concept. Hatched as project at Georgia Tech Research Institute in 2011, the design received a work grant from the DOE’s SunShot Initiative and was commercialized in 2014. The hook here is a triangular support structure that requires less steel and allows for most of it to be assembled on the ground (pictured above).

Solar carports will spread across the country as costs decline

A vehicle auction company in Elkridge, Md., put in a 304-kW system and selected the Quest Renewables QuadPod to reduce foundation counts by 50 percent (using 50 percent less steel) to mitigate the poor soil conditions. From site survey to powering up, the system was completed in 45 days with minimal interruption to the parking lot. Another project in Portland, Maine, needed to minimize disruption of the work area. The 90 percent ground-level construction allowed it to be built in just eight days from start to finish. This first parking garage canopy install in Maine will sustain 112 mph winds and 50 psf of snow.

There’s a long way to go to fill in that void NREL is talking about, but it’s a start.