On the heels of two recently completed photovoltaic installations, the U.S.-based unit of the Westfield Group has awarded a third contract to Martifer Solar USA, a national solar engineering, procurement, and construction firm. The proposed 765-kW array is scheduled to break ground in early 2013 at Westfield’s flagship Century City mall in Los Angeles. Martifer Solar USA installed a total of 1.7 MW of solar at the Westfield Topanga and Westfield Fashion Square shopping malls in 2011. 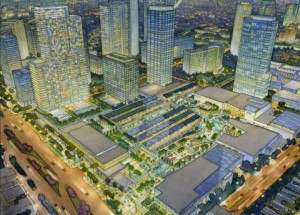 The Century City system will consist of three rooftop arrays and a series of shade canopies. The rooftop arrays will be built above spaces currently occupied by a movie theater, restaurant, and common areas; shade canopies will be installed as part of a new construction process, which will include the addition of a four-story parking structure to the property. Martifer Solar USA is expected to collaborate closely with the Westfield design team to provide a visually attractive system with optimal production rates.

“The Westfield Group is committed to responsible energy management,” stated Joe Jaworski, Westfield’s Vice President of National Operations. “The solar installation at Century City will provide several advantages: return to our investors, competitive edge for our business, and the reassurance to our customers and our community that we are making environmentally sound choices. The immediate payoffs are considerable, and any positive impact that we can make on long-term air quality is beneficial to the Southern California region, where we are a longstanding retail presence.”

Alta Energy, a solar analytics and procurement company, served as project coordinator and was an integral part of the project’s realization. As explained by Sam Lee, Chief Executive Officer of Alta Energy, “We identified Century City as a strategic priority for the Westfield Group based on a comprehensive assessment of multiple properties. Not only will the system meet financial and environmental objectives, but a flagship property like Century City provides a platform to make a definitive statement about the importance of clean energy as a corporate sustainability practice.”

Kathy Huber, Alta Energy’s Vice President of Acquisitions, commented on the proposal process: “The continued partnership between the Westfield Group and Martifer Solar USA exemplifies Alta Energy’s ability to match qualified vendors with businesses that want to participate in the solar energy movement. The synergies between the Westfield Group and Martifer Solar, both global heavyweights in their respective industries, represent the best that solar partnerships have to offer.”

In addition to a strong relationship with its contractor, the feasibility of Westfield’s installations at Topanga and Fashion Square shopping malls was in part attributable to the 30% tax credit currently offered by the federal government, as well as attractive state and local market conditions. The Westfield Group is thought to be one of the country’s largest REITs to own and operate its own photovoltaic systems.

“The installations at Westfield Topanga and Westfield Fashion Square have proven to be successful,” states Raffi Agopian, Chief Executive Officer of Martifer Solar USA. “With a demonstrated financial model and established partnership, the pieces are in place for Martifer Solar USA to give Westfield and its shareholders the best return on their solar investment at Century City.”

Joe Jaworski anticipates a positive outcome. “This solar initiative has been continuously rewarding relationship for us and our partners. We are eager to expand our role as a leader in sustainable business practices, and integrating solar into the energy mix at Century City is a step in that direction.”