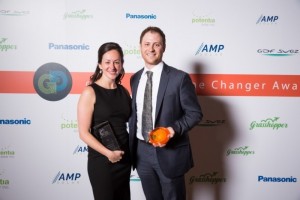 The Women in Renewable Energy (WiRE) group presented the first ever, Solar Power Woman of Distinction Award to Michelle Chislett for her extraordinary contributions to solar. Chislett has excelled in areas as diverse and as important as business development, volunteerism, policy and advocacy, technical research and development, project management and public adoption of RE technologies. Chislett’s pioneering work has been instrumental in developing the FIT policy framework and large renewable procurement programs in Canada.

Chislett is past chair of the board of directors for CanSIA, a member of the Dean’s Advisory Council of Western Engineering, she is a member of the Independent Electricity System Operator Stakeholder Advisory Committee and in April 2012 was appointed as a member of Ontario’s Clean Energy Task Force.

Frank, director of business development at SunEdison, was recognized as the Emerging Solar Leader for his work as National Board of Directors co-chair of the Emerging Leaders for Solar Energy (ELSE) group as well as his efforts to expand SunEdison’s Canadian business. Jonathan was instrumental in driving the massive growth of ELSE’s membership base, the expansion of the Solar Ambassadors program, the launch of a new mentorship program, and hosted numerous events to educate and involve students and young professionals with the aim of advancing Canada’s solar industry. Frank is a director of business development at SunEdison and is tireless in his advocacy for the industry and the benefits of solar energy.

SunEdison has been a leading developer of solar energy projects in Canada since the inception of the Renewable Energy Standards Offer Program in Ontario. In 2014 the Canadian team interconnected 108 megawatts (MW) of solar projects, for a total of over 260 MW of operating solar projects in the province of Ontario. Another 56 MW are currently under construction.

To find out more about each award, visit: gamechangerawards.ca/about