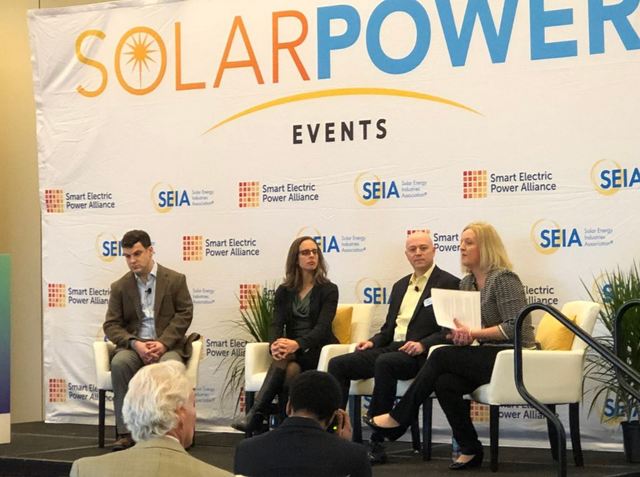 Photo courtesy of SEIA Twitter account (since I didn’t have the cord to get the photos off of my camera).

Solar Power Northeast in Boston is the first solar industry conference in this post #TrumpTariffs world, and the collective mood of the room seemed to be “Eh. Could have been worse.” A speed bump rather than a brick wall. This isn’t to downplay the realness of the job losses or price increases that will most definitely be felt, but to note how just the whole thing being over seemed to lift a burden off everyone.

Setting the tone for the event in the opening session was a CEO panel moderated by Abigail Ross Hopper, president and CEO of SEIA, that included Costa Nicolaou, CEO of PanelClaw (with a C&I perspective), Zaid Ashai, CEO, Nexamp (speaking to C&I and community solar), and Sara Ross, CEO, Sungage Financial (talking about residential). Each CEO seemed pretty optimistic about what the future was going to hold, beyond the tariff obstacle. And the overarching reason, to our ears, is solar is a way more established, mature, proven industry than even three years ago, and therefore better equipped to handle speed bumps like this.

PanelClaw, Nicolaou says, had its foot on the gas in 2017, froze hiring as soon as the trade case was filed and is now looking at a “flatish” 2018, but he was the most bullish about the future. One positive trend he sees is the mix of excited, wealthy players out there looking to develop in the C&I space.

“In the nonresidential space, there’s been an uprising of well funded national, players that can finance anywhere with a fully formed national stack,” he said. “This wasn’t the case five years ago. You had small players, medium-sized players trying to become national players. That dichotomy has changed.”

The reason, he says, is the learning curve of early-adopting Fortune 500 companies has now hit the point where the model for C&I solar – developed through trial and error – is no longer an unknown. This means big players like Wal-Mart or Apple are now ramping up, and others who weren’t early adopters can now easily follow those established models.

The room was polled to see how many developers had ample capital to buy projects at any stage right now, and half the room’s hands went up.

Another interesting dynamic to watch in C&I is how the tax code will change the mix of the players in the tax equity space, which was typically limited to very large multinationals.

“If tax equity becomes less abundant among that group, we think there is a good amount of built up tax equity in small to mid-sized corporations that were maybe looking at the solar space, and now that it’s much more mature, they may look at this with a lot more confidence.”

Ross mentioned how Sungage had already seen some decreases in the residential space due to large the national players shifting gears, and the change in the mix of third party ownership – all of these shifts putting growth in neutral (to keep the shifting analogy going) until the next growth model emerges, or more smaller companies mature enough to fill the void. Here’s how Ross broke it down:

“If I were to take the blood pressure of our clients across the 14 states we are in as a proxy of how the tariffs will affect their business, I’d say in California, they didn’t bat much of an eye. In talking to folks in Texas and Florida, the economics are tighter and have people concerned, but our partners in Texas have learned how to sell residential solar without month-one savings – have learned to speak to the other attributes of solar and life time savings.”

Honestly, here in Boston, the crowd seems way more up in arms about the demand charge Eversource just got approved, and Ross’s blood pressure test bears that out.

“Change in the policy and regulatory environment, is distraction from honing your business, which is already hard work. So, folks here are much more concerned about changes coming with the SMART program and changes with the demand charge from Eversource.”

Born in the Northeast, Nexamp understands this market more than most, handling development, EPC, asset management and O&M work. But the company’s most recent venture into community solar has Ashai most excited.

“I think the future is bright for community solar,” he said. “Look at the Northeast and Midwest. There’s a strong appetite from rate payers and citizens for it, but in Mass., only about 20 percent of roofs are suitable for solar. So, there’s a strong desire to find a way to participate without having to install a system.”

This has been the case for awhile, but again, a new world, with an even more complicated financial structure made community solar a challenge – but maybe no more.

“The hybrid model, of having an anchor tenant and then residential buy-in created a lot of complexity,” Ashai said. “But a lot of success has allowed more lenders and equity providers to come in, and now we see this as the most promising segment from our vantage point in the Northeast.”

In New York, community solar is becoming even more viable with a model that allows customers to change on a monthly basis, whereas in Massachusetts they do this every six months.

“What this allows you to do, when you finance it, you create a wait list and then you can keep replacing customers and know those credits will not get lost.”

And that’s the summation of the chatter in Boston. Tariffs are going to depress the market as much as predicted, but the momentum, proven models and policy interest today will allow the industry to roll with this punch much better than was every possible before.

“We can counteract some of the activity at the federal level with strong state level changes, such as an expansion of the state tax credit for homeowners going solar in Massachusetts,” Ross said. “So expanding that with one tool we have in the tool kit will help counteract that.”