SoCore Energy a wholly-owned indirect subsidiary of Edison International, and Cinemark Holdings Inc. have lit up the big screen with solar power at the Cinemark Tinseltown theatre in Rochester, N.Y. As part of a larger national rollout of Cinemark’s solar installations by SoCore Energy, this theatre has connected 315 kW of solar power from a rooftop installation, an energy choice that allows Cinemark to provide moviegoers with a high-quality experience generated from cleaner energy. 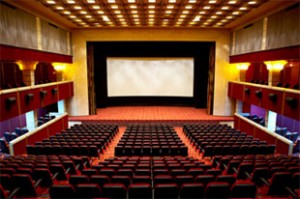 SoCore Energy’s engineers designed and managed the installation of 1,274 photovoltaic solar panels atop the Cinemark building. While SoCore Energy provides the design and engineering for the projects, the construction is sourced locally, supporting clean-energy jobs in New York.

The system is owned by Cinemark, but operated and maintained by SoCore Energy. Cinemark’s solar system will avert over 10 million pounds of carbon dioxide emissions from being released into the atmosphere over the life of the system.

“We are excited to be partnering with SoCore on this initiative,” said Art Justice, Cinemark’s vice president of Energy & Sustainability. “As part of our overall sustainability plan, Cinemark is currently engaged in a 5-MW solar photovoltaic rollout in various markets across the country, including Rochester.”

“We understand how important clean energy choices are for Cinemark and its moviegoers,” said Pete Kadens, president of SoCore Energy. “We are proud to combine the stability of Edison International with SoCore’s entrepreneurial spirit in order to develop ideal solar solutions for customers like Cinemark.”

Typically, most of a cinema’s electricity is used to power heating and cooling systems, projection and sound equipment and lighting. Now, due to the new solar installations, a significant portion of Cinemark’s electrical consumption will be shifted to on-site, clean solar energy.

Edison International, based in Rosemead, Calif., acquired SoCore Energy in August 2013 as part of Edison’s leadership role in building out the next generation grid through technical know-how and capital investment. On-site commercial solar is part of Edison’s vision of a future where customers have more choices and access to clean energy. Edison International and its companies, such as SoCore Energy, are essential to bringing that future to life.