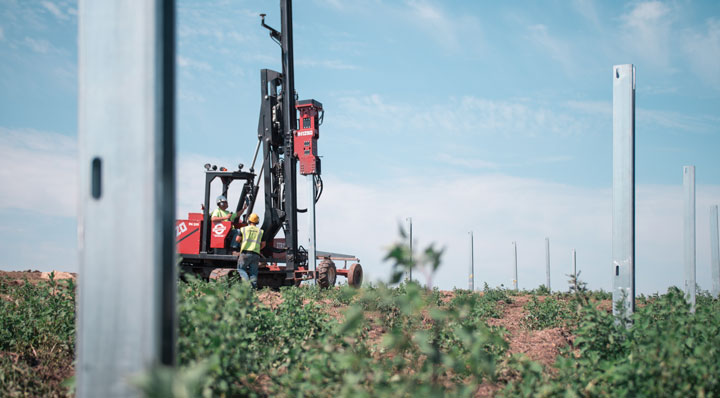 The team at Landwehr Construction encountered one of its toughest community solar installs in Eastern Minnesota thanks to 25-plus ft of weathered sandstone underneath 18-in. of top soil. Landwehr Construction started pounding pile on the larger of the two sites but had a refusal rate of about 80 percent on the first 382 piles, with pound times in excess of 10-plus mins for each pile.

“We determined that we needed to go in a different direction to get all the pile in, especially since we knew the other adjacent site would be the same,” said Robert Schofield, project manager and estimator for Landwehr, which has years of experience in helical anchors. “We used that knowledge and equipment to pre drill all the holes on both sites. To do this, we used two T650 Bobcats, two STR-20 Hercules pile drivers and our Pro Dig and Eskridge drivers with two 6-in. augers drilling to full 15-ft embedment.”

These two crews would drill each location ahead of the two pile-driving crews. With this method, refusal rate was reduced from about 80 percent down to roughly 13 percent.

“Considering how this project had started, we felt this was a great success,” Schofield said. “We were able to pound all the pile in and reduce our pound time to approximately three minutes.”

Hammer Time: What to look for in your next pile-driving machine

There was an engineering concern with pre drilling each pile location using a bit roughly the same size as the pile, so Landwehr pull tested a percentage of the pile, randomly selected by the EPC, to a three times factor for safety (up to 16,500 lbs in vertical with a maximum movement of no greater than 1 in. with a four minute hold time). The greatest movement in all of the testing done on both sites was 0.017 of an inch.

“To date, this was the most challenging site, and that is saying a lot since we have deeper embedment depths than most places in the country,” Schofield said. “On top of that, we do pound pile in the dead of the winter in Minnesota where you can expect to see anywhere from 3 ft to 5 ft of frost any given winter.”

Although the challenges of this job were unique, Landwehr’s years of experience helped finish the pile pounding on time.