Panasonic Corp. is the latest module manufacturer to break the efficiency record. The company reports it has achieved a photovoltaic module conversion efficiency* of 23.8 percent** (aperture area***: 11,562 cm2) at research level, a major increase over the previous world record for crystalline silicon-based PV modules. 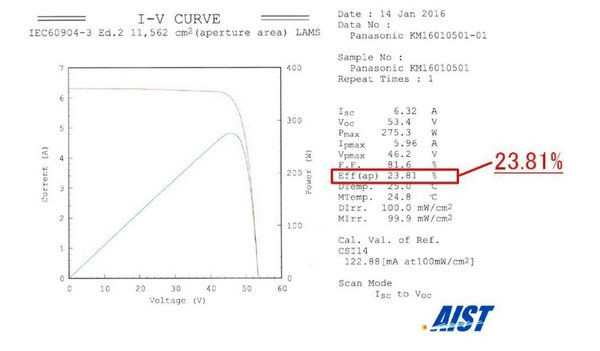 Panasonic developed a unique silicon heterojunction structure (Technology for junction formation required for solar cells that covers the silicon base surface with an amorphous silicon layer. This technology has the key feature of superior passivation to compensate for the many flaws around the silicon base surface area) composed of crystalline silicon substrate and amorphous silicon layers, and has continuously improved its photovoltaic module HIT using silicon heterojunction since the start of commercial production. This new record was achieved by further development of Panasonic’s proprietary heterojunction technology for high-efficiency solar cells and modules adopting a back-contact solar cell structure (Technology for eliminating the shadow loss on the front side electrode with the electrodes on the back of the solar cell, which allows the more efficient utilization of sunlight).

Going forward, Panasonic will continue to pursue technology development of its photovoltaic module HIT, aimed at realizing higher efficiency, higher reliability and lower costs, and will work towards mass production.

If you are new to this whole Panasonic HIT module world, definitely check out the video below for more information.