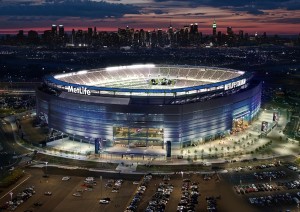 Under the agreement, NRG will design, install and operate a custom solar power generating system–the Solar Ring–that will add a striking visual element encircling the top of the stadium. The Solar Ring will have the ability to display team colors and an array of additional hues to meet the needs of visiting events, including concerts and college sporting contests. Construction will begin in the spring of 2012, with an expected completion date of August 2012, prior to the first pre-season football game.

In addition, NRG will provide all of the additional electricity for the 82,500-seat stadium starting in June 2012.

“A ‘green vision’ for MetLife Stadium dates back to the very beginning phase of our initial development,” said Mark Lamping, President and CEO of MetLife Stadium. “In 2012, sustainable solar power will become an actuality, and we are pleased to enter into this significant endeavor with NRG Energy.”

NRG, one of the largest power generation companies in the nation, is a leader in providing cleaner energy solutions to American businesses and consumers. It is also the largest solar power company in the United States with more than 900 MW of solar generation in operation or under construction by the end of 2011 with an additional 1,000 MW in development.

“This extraordinary installation on the biggest stadium in the NFL, home to two of America’s most iconic sports franchises, will create a unique solar imprint on the consciousness of sports fans across the greater New York region and nationwide,” said David Crane, President and Chief Executive Officer of Princeton, N.J.-based NRG. “We are pleased to be partners of the Giants and the Jets in demonstrating for millions to see the innovative ways that solar energy can be used to help power our nation.”

The solar power system, consisting of approximately 1,500 individual panels manufactured by Atlantis Energy Systems of Poughkeepsie, New York, will be able to generate nearly 25 times the amount of electricity needed to power the integrated LED lighting and display system.

The panels will be assembled into 52 modules that will be raised to the top level of the stadium and bolted into a steel superstructure which will also provide shelter from rain and snow.

“Our goal is to provide our fans with the best possible game-watching experience, one that is exciting, enjoyable and environmentally conscious,” said Woody Johnson, Chairman and Chief Executive Officer of the New York Jets. “Our partnership with NRG illustrates our commitment to this cause as we continue to explore eco-friendly initiatives to make MetLife Stadium the best in the world.”

“We are pleased to team up with NRG, a company that possesses the power to improve our Stadium’s environmental impact,” said John Mara, President and Chief Executive Officer of the New York Football Giants. “NRG provides the necessary skills and experience to execute this game-changing endeavor, which has a welcomed place at MetLife Stadium.”

“MetLife Stadium is no stranger to unique, trendsetting innovation,” said Steve Tisch, Chairman and Executive Vice President of the New York Football Giants. “The largest football stadium in the NFL–the only to house two teams–also proudly displays the most technologically advanced infrastructure and now dedicated to the identification and exploration of new, cutting-edge eco-friendly ventures.”