Trackers aren’t quite the niche product they used to be, only provided by a handful of manufacturers. There are some new players in the space with new solutions, and some of the old standbys continue to improve on their offering and pricing.

SunLink’s (booth 2037) new TechTrack Distributed single-axis tracker reacts intelligently to real-time conditions to increase generation and reduce the risk of harm to the power plant. Dynamic stabilization provides damping when unlocked, secures the structure during critical events and dramatically increases system natural frequency. In addition, by reducing the maximum torque in the system by 67 percent, the system is stronger, lighter and more cost-effective than other trackers. Continuous tables and 120-degree tracking yield the industry’s best power density and generation. More on this one here. 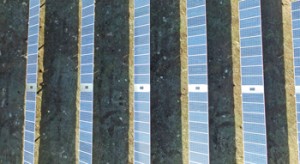 Genius Tracker from GameChange Solar (booth 1939) provides one of the fastest install times out there (a 10-person crew installs 1.7-MW trackers and panels per week). Its linear actuator drive system has a 40-year operating life and is IP 66 rated for operation in harsh environmental conditions. Every drive actuator has its own battery backup and wirelessly linked controllers, eliminating all trenching and Tru3D-Gimbal bearings account for pile installation being out of plumb, out of azimuth and out of vertical and east-west alignment. More on this one here. 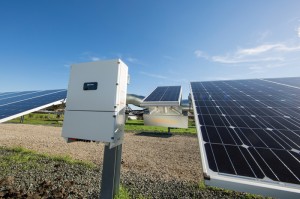 Spanish company Grupo Clavijo (booth 2560) will once again be attending SPI with its latest generation of advanced single-axis trackers — the SP160 (single-row) and SP1000 (multi-row) models. New to the lineup is a spherical bearing, which the company says will lead to a faster assembly time (as it is made up of fewer pieces), and has the capacity to absorb a working angle greater than 60 degrees with structural systems that reduce the center of mass and decrease the consumption required for movement and greater stress resistance. 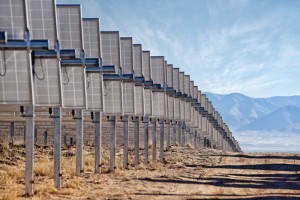 The DuraTrack HZ v3 from Array Technologies Inc. (booth 2805) provides a low overall cost thanks to a streamlined design that is easy to install. Undulating terrain? Take advantage of flexible tolerances that permit up to 40-degree off-set in the east-west direction and 15 percent slope in the north-south plane. The DuraTrack HZ v3 is engineered for long-term durability with only 180 electromechanical components per 100 MW, compared to alternative systems that have up to 30,000. The tracker requires no scheduled maintenance and has a field-proven uptime of 99.99 percent. 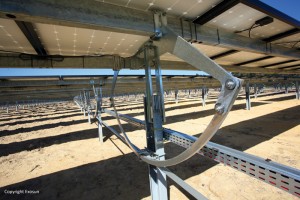 Exosun’s (booth 3013) single-axis solar tracker, Exotrack HZ v2, comes in at an installation rate of 200 man-hours per MW for mechanical installation. No machines are needed to assemble the structure’s few and lightweight parts on site, reducing installation time. Thanks to its short rows, the system accepts high land irregularities, even between piles. Exotrack HZ v2 smoothly follows flowing topography without land grading, and its linked-row architecture and grease-free, balanced structure adds reliability.