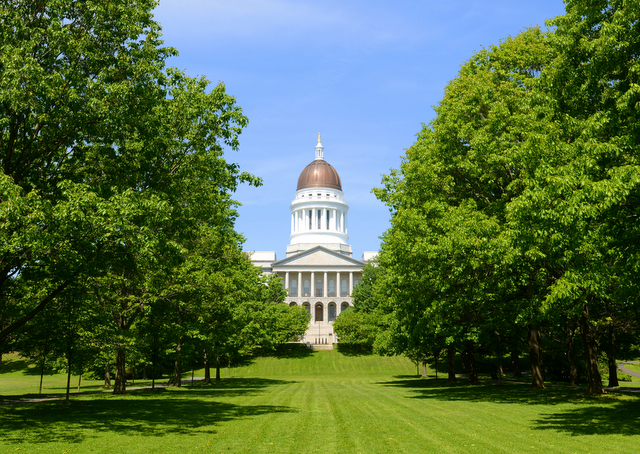 A solar energy bill was defeated in Maine last month, and the reason it was defeated, according to this feature in the Portland Press Herald, was a lobbying effort by the country’s largest solar installers. For those installers – SolarCity, Sunrun – getting involved in local politics to work on pro-solar legislation is nothing new, but this article claims that their efforts killed what some local solar installers in the area considered to be a positive bill for the solar industry.

From the Portland Press Herald:

Jake Hunt, an employee with InSource Renewables in Pittsfield, installs solar panels in East Vassalboro. Vaughan Woodruff, the company’s owner and an advocate of the proposed solar legislation, says an amendment late in the process served as a distraction and “gave shelter to opponents.” The bill ultimately failed to override Gov. Paul LePage’s veto by two votes.

The conflict between national solar companies and their Maine counterparts reflects deep divisions over how to credit the homeowners and small businesses for the power they generate on rooftops and in backyards.

Those credits are seen as essential to the expansion of solar power because they provide a payback for the upfront investments in solar equipment. A solar-electric system can cost $15,000 to $18,000 for a typical Maine home, with a payback period of up to 12 years after a 30 percent federal tax credit, depending on electricity prices.

Of course, net-metering sits at the heart of this story, as it does with all of these local political wranglings. The Maine solar bill would have replaced net metering with a new, untested alternative credit system that was “crafted by a coalition of local solar installers, top Democrats, the state’s public advocate, utility companies and the state’s clean-energy and conservation groups,” according to the Portland Press Herald. “Utilities would have bought the solar power in combined, long-term contracts at rates that would have decreased over time as prices fell and solar penetration grew.”

Net metering is regarded as hugely important in solar’s value proposition for a homeowner, and many in the industry fight for the full retail rate to be maintained. And while this definitely makes sense (getting paid for contributing energy back to the grid at the value it is allegedly worth), utilities and regulators often fight against it, and maybe rightly so. We only know that no one seems to agree on what compromise might satisfy all parties. New York has maybe found a solution.

But it is interesting that in this case the perspective of the larger, more powerful solar voices – who have won a lot of battles for the entire industry – might be clashing with some of the more local, smaller voices. Regardless, the issue is still unsettled and will now be handled by the state’s Public Utility Commission (PUC), which isn’t always a good thing for the solar industry. Maybe a risky gamble on the larger installers’ part.

Definitely read that full article for a lot more details into the lobbying effort and the bill’s demise.