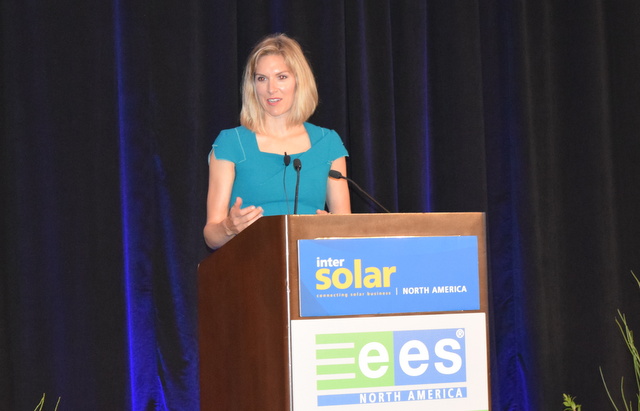 Every year, Intersolar North America takes places in San Francisco, which always provides the perfect backdrop for a show that wants to discuss and show the solar industry’s path forward globally. We in America obviously recognize the leadership position San Francisco has taken in solar here, but as we were reminded during the opening session of Intersolar last night, the state of California would rank as the fifth or sixth largest nation in the world in terms of GDP. So, the impact of San Francisco’s solar adoption within this leading state echoes across the globe – and really, that was the common thread among all of the speakers in the opening session: Solar technology fights the biggest of macro, global issues on the most micro of levels – a somewhat obvious but salient thesis.

Previous years in the Intersolar’s history were much more about possibilities for a fledgling industry – how to drive down costs and influence stakeholders. The goals now are less about industry survival and more about planet survival – the industry is here, and is booming, so now how can we disrupt old notions and remake modern infrastructure (and the world), with this technology, into something better?

RELATED: Intersolar 2016 Preview: Check out these products making their debut on the show floor

Some notes and stray observations from the opening session that nip at that question: