There is no rest for the solar industry, and the opening of Intersolar North America 2017 was a reminder of that. CALSEIA executive director Bernadette Del Chiaro kicked things off with a history lesson on how far her state has come since the passage of the California Solar Initiative in 2008. At that time, the state had 130 MW of solar capacity – total. That bar on the capacity timeline chart she showed was a mouse compared to the elephant-sized capacity numbers a mere 10 years later.

But we all know that tale of triumph, and for as much as prices have dropped and technology has improved, there is a ton more work to be done, much of which requires political clout, compromise and further innovation (like passing California’s energy storage bill, SB 700). The opening speaker lineup at Intersolar helped provide that blueprint. 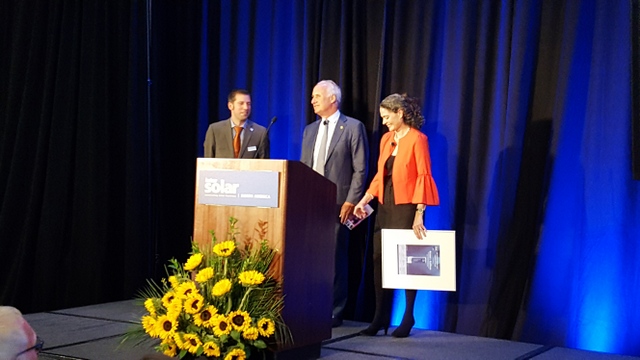 The Intersolar Champion of Change award was given to Richard Kauffman, the Chairman of Energy and Finance for New York, who has been leading the state’s Reforming Energy Vision (REV) plan – a renewable energy strategy with aggressive goals and buy-in from all industry stakeholders. Kauffman is never one to mince words about what needs to change about the grid and how the REV is doing that:

“We can’t keep bolting DER and large-scale renewables on to a grid that wasn’t designed for them,” he told the crowd. “We need to build a new grid. Need to drive capital to build the grid of the future and that’s what REV aims to do. So far, we’ve got support of utility industry and the business community because there are a lot of winners if we do this right.”

“We need to help utilities start thinking of solar as a business for them too, and I’m not talking utility ownership. Our grid is not only energy inefficient – which is not a surprise because it wasn’t designed to be — it is financially inefficient. There are ample opportunities for utilities to earn a share of savings for improving the inefficiency of the system, and solar and storage can make a big difference.” 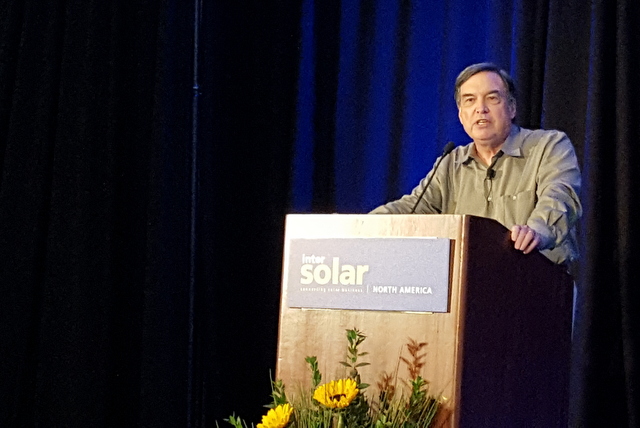 Last Intersolar, we were lamenting the death of the Nevada solar industry. In a year’s time, we are celebrating not only its return, but its new features, such as the Solar Consumer Bill of Rights. Jon Wellinghoff, principal at Policy/DER Consulting, played a big part in that revival, demonstrating the value of solar to the grid in the case. The case was so compelling the new commission reversed the decision of the prior commission.

“Not just that solar is going to integrate storage. We need to look at it from a DER perspective behind the meter. Demand response, energy efficiency – all of those things have to be integrated. You unify the whole and you can provide the consumer with the resources to not only control costs internally but have the ability to make money externally in the markets.” 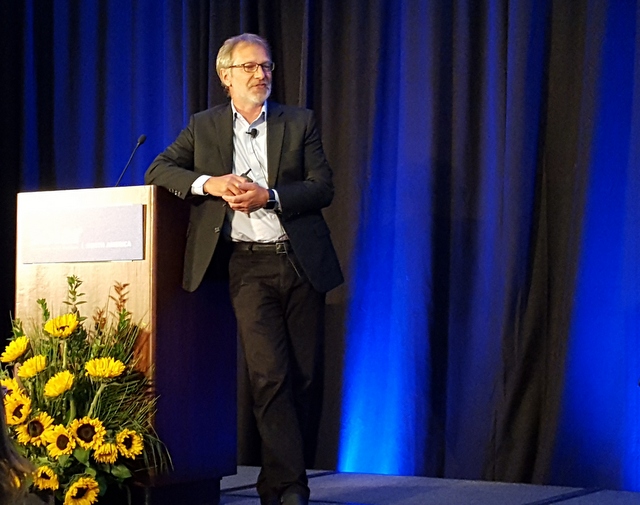 But all of this kumbaya, pro-solar integration will still fall short, says Martin Keller, director of the National Renewable Energy Laboratory (NREL), if new materials and new production methods don’t hit the market. His organization is at the forefront of renewable research and pushing innovation.

“What are some new materials we can combine with new manufacturing technologies?” he asks. “If you are really serious about manufacturing on a global scale, we need new methods and new materials.” He points to perovskite solar cells as one hopeful example, with a chart showing a severe uptick in efficiency compared to today’s cells.

“It’s years out from production, but you can see the increase in efficiency is a very steep slope, and combine with new technologies like inks and spray ons.

That and new storage methods are the biggest items on the NREL agenda right now.

“Whatt is storage for grid level?” he asks. “Is a battery even the right medium for the future at large scale? This is one of the big research areas for us in the years to come.”