How to Protect PV Systems From the Worst Weather 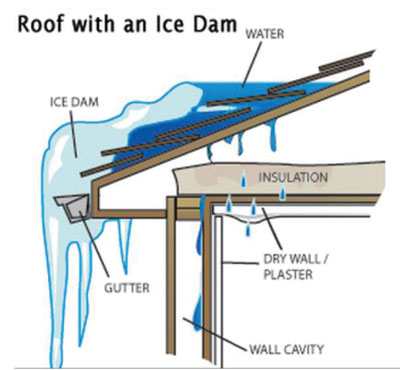 Installers should avoid positioning systems in areas of the roof that might experience ice dams or accumulation of snow under the array.
Graphic Courtesy of Quick Mount PV.

To successfully harness the sun’s power, all other environmental elements must be controlled or defeated.

First, a disclaimer: As with any weather-related discussion, considerations vary by region. Technical engineering reports for racking systems must reflect local weather conditions and the type of application.

“Snow and wind will greatly influence the design and engineering, which includes the number of required posts or piers and all additional factors of safety built into the system,” says Maria Verros, senior sales and marketing manager for PV Racking. “Each and every quote that we provide for racking requires our design experts to do additional research to confirm this loading information.”

For example, ground mounts in California or Florida will typically be governed by wind design since there is little to no snow load. More northern locations will need to really consider loads of 50 or 60 pounds per square foot (psf). In-between areas, according to Matt Gilliss, independent engineer with Solar SpeedRack Inc., are likely to be governed by “a load combination in the code that combines both wind and snow but with a small reduction to each since it is unlikely to have worst-case snow and wind loads occur at the same time.”

Check out the Mounting Trends Feature from our 2015 Mounting Guide

Gilliss sets the snow load bar at 15 to 20 psf for many typical types of installs; beyond that, the racking design will need changes, such as limitations on the span of framing and additional posts/foundations.

“When it comes to snow retention, we estimate that panel psf is no more than 50,” says Jolene Ciosek of EcoFasten Solar. But many regions in the United States can see loads above that mark. If snow loads are ignored in regions where they shouldn’t be, an installer may attach the racking at 8-ft spans, but in a very heavy, wet snow storm the racking could collapse.

But even then, ice and snow present different threats both to the solar structure and its surroundings depending on circumstances. Some typical rooftop setups are less at risk from snow.

“For roof-mounted arrays, typically wind is the governing element as the arrays and racking tend to be low to the roof and require frequent anchor points in order to transfer loads evenly to the structure’s framing below,” Gilliss says. “This ends up limiting the spans of the racking, which reduces the stresses caused by heavy snow loads.”

According to Quick Mount PV’s Jeff Spies, senior director of policy, and Duane Menton, mechanical design engineer, “Installers should avoid positioning systems in areas of the roof that might experience ice dams or accumulation of snow under the array. If snow does build up under the array, the inevitable freeze/thaw cycles can create iceberg action that can literally pry the array off the roof.”

This is a major concern with dual pitch roofs that have a steeper upper slope that transitions into a lower slope pitched roof. If the snow doesn’t slide off the array and the roof, the accumulation of snow downhill of the array can freeze, expand and create a damaging uplift effect.

There is also the possibility of accumulated snow sliding off the slick array surface, ripping off gutters and avalanching onto whatever or whomever is below. Ciosek recommends snow management devices or snow guards.
High tilt ground mounts are less susceptible to snow loads, which means wind loads will often take precedence over snow loads, even in the extremely snowy climates.

Even the most mild climates will need to consider the area’s history of wind, the geography of that specific project location and the geometry, the height and total exposure of the system.