Half Moon Ventures LLC (HMV), a Chicago-based developer of solar and wind energy projects, unveiled its first solar electric power generation system in New York at a ceremony on the roof of i.Park Hudson yesterday, joined by Yonkers Mayor Mike Spanoand Joe Cotter, principal of real estate development firm National Resources of Greenwich, Conn.  The multi-million dollar installation – which blankets as much square footage of rooftop as two professional football fields – is one of the largest in the state of New York and, when operational next month, will generate significant energy for the many users of electricity housed in the 24-acre technology, office and industrial complex in the heart of Yonkers. 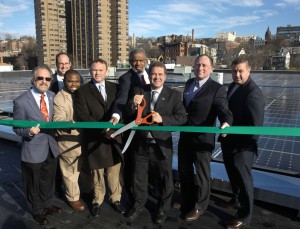 “We are thrilled to bring this cutting-edge solar energy system to i.Park Hudson in Yonkers at no cost to the State, County, City or landlord,” said Michael Hastings, CEO of Half Moon Ventures. “The environmental benefits, including easing demand on the grid and reducing carbon emissions, are tremendous. There are many other benefits as well. This is a win-win on a very large scale and we hope that this project provides a template and role model for future commercial energy projects here in New York and beyond.”

Hastings cited numerous other advantages of solar power projects like the 1.08-MW installation at i.Park Hudson, including: reducing energy costs; locking-in electric power rates for the long-term in a volatile environment; financing major infrastructure improvements; increasing property values; and creating jobs. In the case of i.Park Hudson, where tenants include heavy consumers of electricity such as Kawasaki Rail Cars, the solar energy system will provide as much as 15 percent of the power to the complex, dramatically reducing its reliance on Con Edison’s system, especially during peak use summer hours.

“The City of Yonkers is proud to be home to Westchester County’s largest commercial rooftop solar power system,” said Yonkers Mayor Mike Spano, who as a member of the State Assembly co-sponsored of the New York Solar Industry Development and Jobs Act. “Private sector investments such as this play an important role in helping to blaze the trail toward a greener, stronger New York.”

“As a developer and owner with a fervent interest in sustainability and preserving resources, we thought this arrangement with Half Moon made great sense for the National Resources business model,” saidJoseph Cotter, president of National Resources, which owns i.Park Hudson. “Anything that helps us operate as a responsible member of the community, take good care of our tenants, and improve our asset is a welcome development. Half Moon’s wealth of experience in sustainable energy made them the logical choice to work with us on this.”

At i.Park Hudson, which is home to the City of Yonkers, Westchester County, the New York State Division of Motor Vehicles, St. Joseph’s Hospital, Skil-Care Corporation and others, as well as Kawasaki Rail, the solar panels are housed on four different roof areas across the eight-building complex. Two on-site inverters will convert the panel-generated power from direct current (DC), the form in which it is generated, to alternating current (AC), the form in which it is consumed.

“This site is a good fit for solar because it has enough rooftop square footage to locate the panels and inverters, because the cost of electricity in this region is fairly high, and because the tenant base consumes enough electricity to make the cost savings significant,” Hastings said. “Using the 110,000 square feet of rooftop, we’ll generate enough power on-site to ease demand on the grid by about 15 percent and ease the owner’s operating costs considerably.”

William W. Fetterley, Half Moon’s chief operating officer and an American Institute of Architects associate with a number of major power-generation projects under his belt, notes that the solar and wind company is scouting this region for more opportunities where either model is feasible.

“We believe there are a number of commercial properties in this region that are good candidates for solar power – whether it’s roof-mounted like at i.Park or ground-mounted where there’s enough land for that. Especially in regions like the Northeast, where electricity is expensive, solar is a solid proposition for all concerned,” Fetterley said.

Half Moon expects to have the system at i.Park Hudson fully operational by mid-December.  When complete, it will generate more than 1.2 million kWh of electricity a year – enough to power over 120 homes for a year – while removing the equivalent of the annual harmful greenhouse emissions of over 160 cars from the environment. Because of the climate and meteorological considerations, the panels, which have a life expectancy of 20 years, will generate the most energy in the summer, when energy is most expensive, and least in the winter, when electricity is at its cheapest.