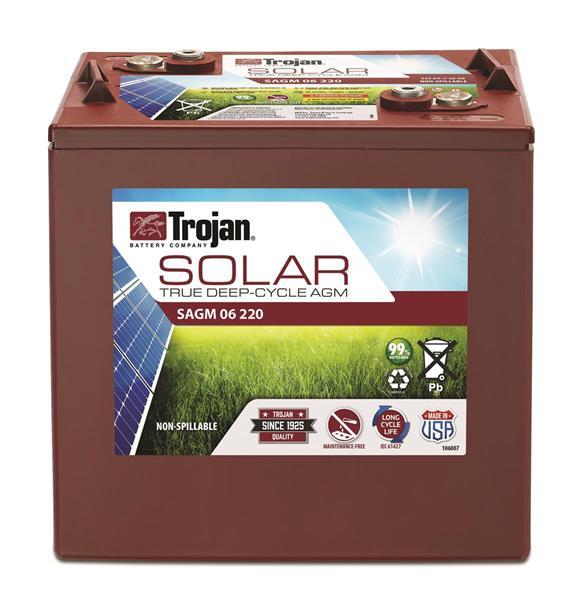 Offering a three-year warranty for stationary applications, and tested to an eight-year design life under IEC 61427 standard for solar batteries, this initial release includes a wide range of Trojan Solar AGM models. With its non-spillable design, the new Trojan Solar AGM batteries enable installers to customize the use and position of the batteries in customer applications, and are certified for non-hazardous shipping per U.S. DOT/IATA regulations.

The Trojan Solar AGM line of batteries will be showcased at Intersolar Europe this week in Munich at the Trojan Battery booth B1.260.

“As we continue to see strong customer interest and demand in applications such as residential storage (both off-grid and grid-tied), solar home systems, microgrids, remote telecom, as well as oil/gas, Trojan’s new line of true deep-cycle Solar AGM batteries has been designed from the ground up and optimized for these types of solar applications and the need for frequent cycling in harsh environments,” said Ganesh Balasubramanian, director of new market development for Trojan Battery. “Trojan continues to remain the only global battery manufacturer to engineer, and produce only deep-cycle batteries, and now we have leveraged our 90 years of deep-cycle flooded experience into engineering and manufacturing the best cycling AGM battery line batteries for solar applications worldwide.”

Is there a PV storage solution between lead-acid and lithium ion?

“With batteries being one of the most expensive components of a battery-based solar system, it is critical to maximize the life of the battery bank to reduce the total cost of ownership of a system,” said Michael Grundke, general manager of EMEA for Trojan Battery. “Trojan’s new Solar AGM line illustrates the company’s commitment to offering reliable energy storage solutions for a wide range of renewable energy market segments. Trojan continues its focus on being an innovative leader in the energy storage space.”

Trojan’s Solar battery line incorporates a wide range of advanced technical features including a robust proprietary paste, advanced plate design and premium separators for overall extended lifecycle, and optimized for total cost ownership. In addition, Trojan’s new deep-cycle Solar AGM batteries are temperature tolerant, shock and vibration resistant and have a low internal resistance for higher discharge current and higher charging efficiency. These features make it the ideal battery for the harsh and demanding environments of off-grid as well as grid-connected systems with frequent cycling needs.