Jamie Brown had been doing basic electrical work for many years until 2007 when one day a customer needed someone to install a PV system on his home. Jamie did the job, and since then has installed more than 500 solar systems on residences in South Carolina and North Carolina.

In early 2015, he was introduced to Roof Tech products by sales director Tim Vaughn during a training session with Roof Tech’s local distribution partner for the Carolinas. Later that year, he got a call from Roof Tech regional sales manager Sam Hilley and decided to try E Mount AIR. 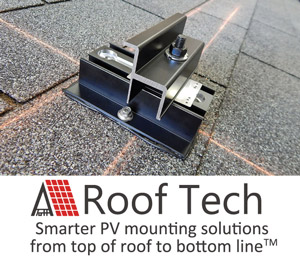 “I did the very first Roof Tech installation in South Carolina,” Jamie said. “The results were great, and I’ve used E Mount AIR on every one of my installations since then. There’s simply no comparison between railed systems and E Mount AIR. Installation is so much easier and faster now. The entire system is flush to the roof with no rails hanging out, and the esthetics are amazing. Homeowners absolutely love it.”

Jamie noted that the solar market in the Carolinas has been growing steadily over the past few years. Incentives from power companies are increasing, and more and more homeowners are taking advantage of tax credits. At the same time, the cost of materials has been coming down.

It all adds up to increased volume for Brown Electric.

“Before, we were averaging about 50 solar installations a year,” Jamie said. “Today, that number has grown to more than 100.”

After seeing how pleased his customers were with the aesthetics and performance of E Mount AIR, Jamie gave Roof Tech the ultimate endorsement: he choose it for the first-ever solar installation on his own home. In October 2015, Jamie installed a 9000-W system on his home using one solid PV array, all using E Mount AIR.

“Looking ahead, I envision a steady increase in my use of Roof Tech products,” he said. “Customer service, amazing aesthetics and ease of use: these three things make Roof Tech great.”

Roof Tech, Inc., is the first U.S. subsidiary of Yanegiken, a Japanese company renowned for more than four decades of innovative roofing technologies. In June 2012, Roof Tech established its U.S. operations and is headquartered in Chula Vista, California, Roof Tech has a national network of distributors in place to provide its unique PV solar mounting solutions for residential and commercial projects.