The first results have emerged from one of the very first BiSoN bifacial module operating systems from Italy-based MegaCell to be installed: during the first month of exposure (from Nov. 27 to Dec. 23) the average yield was 120 percent greater compared to a standard system, meaning that the bifacial installation produced more than double the amount of energy compared to the traditional installation made up of standard non-bifacial modules. 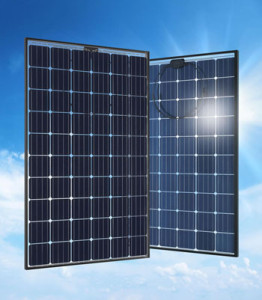 These are the first data gathered from a private installation of 4,4 kWp (16 BiSoN mod. MBF GG60 modules) on Reichenau Island in Lake Constance in Southern Germany and announced by the ISC Konstanz research institute, which specifies that these data are certainly trustworthy but slightly approximate, as the comparison is made with a 10 kWp installation located 7 km away.

Although it cannot be defined as a true test as the two installations do not have identical characteristics (location, configuration, power etc.), it is still the first significant estimation of the real production capacity of the bifacial PV modules. The statistics demonstrate a daily average production of 1.8 kWh/kWp made by the bifacial BiSoN modules compared to a 0.8 produced by traditional monofacial modules.

ISC’s Joris Libal explains that this noteworthy difference is due to the fact that during winter there is a high incidence of diffused light caused by cloudiness: in this situation the traditional monofacial PV module has a low production, only from the front, whereas the bifacial module can also rely on the contribution from the rear side. In sunny conditions this difference would be less significant as the front efficiency of the module would be proportionately bigger.

Making a yearly projection, ISC estimates that the efficiency yield of this installation with bifacial BiSoN modules should be between +25 percent and +40 percent with very high peaks during the winter months, as already demonstrated, or during very cloudy days.

The greater productivity of the bifacial BiSoN module compared to the traditional monofacial concept, especially during days with a poor level of irradiation, demonstrates that the highly efficient bifacial technology, of which MegaCell is a world-leading pioneer, surely represents the future of the photovoltaic industry.