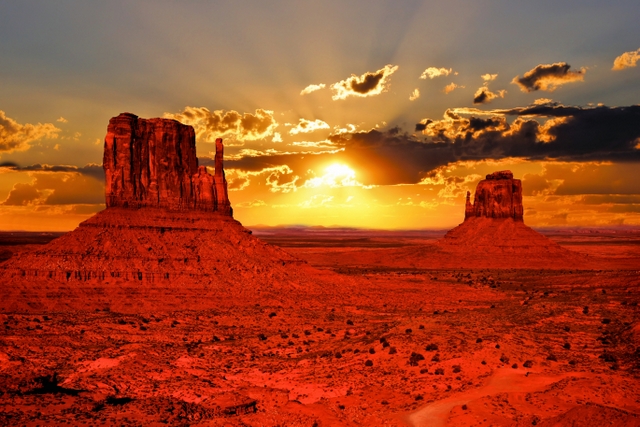 An Arizona sunset — both a stock image and a metaphor for this story.

The sunniest places in the country really like to limit that potential, it seems. The latest state to “save its taxpayers” from the evils of empowering them to be energy independent is Arizona. Said less snarkily, in a 4-1 decision, the Arizona Corporation Commission (ACC) ended its state’s net energy metering (NEM) program.

Here is how its press release announced the decision. Prepare your eyes for some serious rolling:
In a first of its kind in the nation decision, the Arizona Corporation Commission voted 4 to 1 to restructure how distributed generation (DG) is compensated and paid for in Arizona, laying the foundation to invigorate renewable energy technologies while providing equity to all customers. The Commissioners’ decision to replace net-metering is landmark and protects the tens of thousands of existing customers while restructuring the methodologies to determine a fair export rate for the future.

RELATED: Surviving the Nevada solar drop off: How Green Solar grew business minus its biggest market

To be fair, this decision isn’t as detrimental to the industry as the one Nevada passed last year. Arizona is going to let current solar adopters keep their net metering deals, and the immediate cost to new customers isn’t as stark as Nevada’s earlier decision.

“Compensation under the new methodology would initially be set at around 11 cents per kilowatt-hour for most customers, close to the current retail rate net metering credit,” explains Sean Gallagher, the vice president of state affairs for the Solar Energy Industries Association (SEIA) in a recent blog post. “But that rate will decrease in future rate cases, and new solar customers aren’t protected over the longer term. In effect. Arizona ignores the fact that, among its many other attributes, solar reduces demand on the grid and reduces the need for substantial transmission and distribution investment.”

“Existing solar customers can rest assured that their investment is safe,” said Commissioner Andy Tobin. “Our decision recognizes those customers while taking the next step by determining rates which take into account advancements in solar and other renewable technology which helps us push forward proactively.”