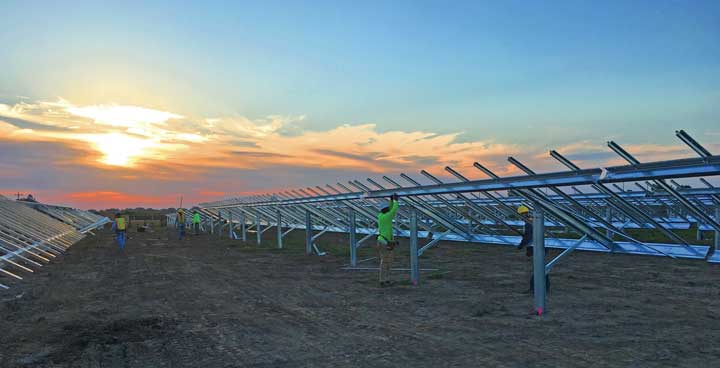 For the first time ever, in 2016, U.S. solar ranked as the No. 1 source of new electric generating capacity additions on an annual basis. In total, solar accounted for 39 percent of new capacity additions across all fuel types, and these big numbers are coming via big installs as the utility-scale segment grew 145 percent from 2015.

“In a banner year for U.S. solar, a record 22 states each added more than 100 MW,” says Cory Honeyman, GTM Research’s associate director of U.S. solar research. “While U.S. solar grew across all segments, what stands out is the double-digit gigawatt boom in utility-scale solar, primarily due to solar’s cost competitiveness with natural gas alternatives.”

The trend shows no signs of reversing, and as utility-scale solar projects continue to boom, the industry demand for material and logistical services will keep increasing pressure on suppliers like never before.

“It’s a simple matter of supply and demand,” says Chuck Galbreath, VP of supply chain at SunLink. “If I have more time, I can find more options and drive down costs. When schedules are compressed and I’m forced into a tight delivery window, I have to go with the supplier who is able to deliver in the time allotted, which allows less room for negotiation.”

Others agree: “We often encounter requests for expedited finished product that can be more aggressive than the lead times from the steel mills. For our proprietary racking systems, OMCO is now maintaining a responsible level of steel inventory to support these instances,” states Todd Owen, General Manager of OMCO Solar.

Because the sector is so dependent upon the steel market, finished product pricing can be volatile. The recent anti-dumping lawsuits spurred market increases that were felt in all steel industries, including solar. Benvie says TerraSmart has countered the pricing roller coaster by making strategic hedge buys and leaning on suppliers to honor and hold pricing so they are capable of manufacturing product at a reliable price point.

To help combat delivery delays, more mounting companies also are establishing regional centers. “Steel delivered to and from opposite coasts can have a significant impact on costs and schedules,” Benvie says. “Strategic manufacturers have set up facilities that are centrally located and/or have different branches at opposite ends of the country. For example, TerraSmart has opened a new manufacturing facility in Columbus, Ohio, and can manufacture identical parts out of the Southeast, Southwest and New England.”

RELATED: We look at the value decentralized tracker systems bring to a project

“As the solar industry matures and adopts the more typical rigid large-scale construction approach to project schedules, timelines have been compressed and suppliers are now expected to adhere to strict, tight daily schedules,” says Nick Troia, VP of corporate quality and project management at SunLink. “It is a more professional atmosphere that in some cases is straining the less sophisticated suppliers.”

The compression is substantial: “We ask customers for a 12-week lead time, but in this market we are lucky if we get eight,” says Larry Reeves, a project manager for Array Technologies Inc. (ATI). “Schedules are crazy now.”

Seasonal variations also intensify weather constraints. “The solar industry is challenging, as many financiers, developers and EPCs push to close projects out in Q4,” Benvie says. “In New England, this can be increasingly challenging with projects kicking off as the daylight hours get shorter, temperatures drop and field conditions deteriorate.”

“Without getting into the dollars and cents, delays can be very costly, such as the triggering of liquidated damages that could accumulate at thousands of dollars per day or by hindering project completion for a tax credit deadline,” observes Troia.

Losses can be the cost of customer maintenance, too. In some of these unavoidable situations, someone involved in the project has to recognize and proactively eliminate a delay before it happens.

“We believe we are truly partners with our clients, so we commonly shoulder costs or increase productivity to minimize the sting of a delay, regardless of who caused it,” Benvie says.

Next, we look at the turnkey services and systems designed for saving time on project development.