Making sure you never hear those words concerning rooftop solar arrays can be as simple as installing smaller inverters.

The commercial rooftop PV market is one of the largest segments of the solar industry and contributes to a substantial, and continously growing, percentage of electrical energy supply. As the industry matures, fires resulting from commercial rooftop PV systems are a growing concern. The solution to the problem comes down to identifying the root cause — a blindspot.

The Blindspot
Existing U.S. commercial PV inverter systems can only detect faults on the ungrounded conductor and not on the grounded conductor. A revision to the UL-1741 standard that regulates PV inverters is currently being considered to eliminate this blindspot. Today, the standard requires PV inverters to detect and respond to faults that can cause fires. This protection is provided by ground fault detection and interrupt (GFDI) fuses.

A secondary issue is that large commercial rooftop arrays normally use large commercial-scale inverters (100 kW and larger) that have large GFDI fuses in the range of 3 to 5 Amps. These large fuses have low GFDI sensitivity, which is required to reduce false trips from the 100-kW arrays. The sensitivity of the GFDI protection needs to be increased to the range of 0.3 to 0.5 Amps, which is similar to small residential PV inverters. 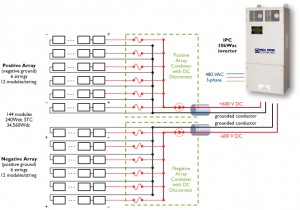 A typical array configuration with the IPC inverter.

Eliminating the Blindspot
Some PV installation firms suggest that expensive field upgrades may be required for both existing and new systems until PV inverters have been redesigned to eliminate this blindspot in fault detection. But there is a new commercial PV inverter solution available that solves these problems without any additional inverter or installation cost. Ideal Power Converters (IPC) has developed the IPV-30kW-480 PV inverter that weighs only 94 lbs compared to the 1,200-lb conventional 30-kW 480VAC 3-phase inverters, and it provides fault detection on the grounded conductor, which eliminates the blindspot.

A typical array configuration for IPC’s 30-kW inverter (seen at right) operates with a bipolar array design using matching postitive and negative arrays. Each array has a grounded conductor, and the ungrounded conductors have opposite polarity.

A look inside the inverter.

Typically, if GFDI fault currents of 2 to 3 Amps occur during the initial grounded conductor fault, this will be too small to trip the large GFDI fuse. Reducing the relative size of the inverters is one approach to increase GFDI sensitivity and safety. Large rooftop PV arrays can still be supported, but they would use an increased number of smaller inverters.
The solar industry is rapidly maturing, and fire safety is one of the issues where the industry needs to respond to concerns. IPC has developed and is offering a simple off-the-shelf solution to this problem in its new inverters without additional installer cost or effort.