The solar+storage equation for investors boils down to the complexity and newness of the technology. Storage system performance has yet to be verified over the long-term or across multiple sites, and customers are expecting to get long-term returns.

On its face, adding a storage component to a solar system just seems to make sense. Why not save up energy when the sun’s power is abundant and then use it at times of peak demand or at night when there is no sun?

The idea is almost too obvious. Putting storage with a solar system could allow for a better guarantee of how much energy is going to come out of a system, and guaranteed energy can be worth more money. A giant commercial solar system or a large-scale, grid-tied solar system that is going to provide capacity to a utility needs to be super conservative with its estimates to account for all of the familiar variables that affect the output of a solar system. But, taking that system and tying in a storage component can help deliver a firmed product to market.

Great, right? The issue of course is getting the technology right and turning that concept into a reality, and doing so in an economically viable way. The barriers that the solar industry faced in its infancy — proving the technology, supplanting entrenched ways of doing things — are the same barriers ahead of the storage+solar model. Or, as Matt Roberts, executive director of the Energy Storage Association, puts it: “Who is paying for this whole thing?”

“Say you can get 3 cent kwh — incredibly cheap. Cheapest PPAs in the world right now,” he says. “I can put that online right now. Oh, you want to throw new technology in? What’s your field experience? Two years? I’m a multimillion-dollar investor that’s about to put a whole new line of business in here, and I’m expected to respond to something I’ve only seen two years of?”

As cool and potentially game-changing as solar+storage can be, traditional lending can see newer, unproven models as a hindrance. The solar industry got through its startup phase, when some deals sank and some deals flourished, and now VCs know what rates of return to expect. Battery systems will have to go through the same process.

“Solar deals are well understood,” Roberts said. “They are profitable and reliable, but throwing storage into the mix gives a new factor to consider.”

Lenders will ask, “why am I blowing up this solar deal to add on a new facet that I now have to research?” The issues for investors boil down to the complexity and newness of the technology. Storage system performance has yet to be verified over the long-term or across multiple sites, and customers are expecting to get long-term returns.

“It’s happening. It’s not resistance; it’s just a lack of understanding,” Roberts says. “It is hard to quantify in some ways, and that makes people feel uncertain and makes financing harder.” 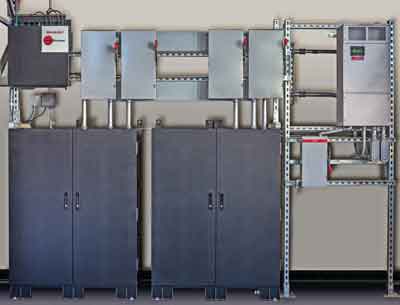 The Sharp SmartStorage system predicts when to charge and discharge

None of this means these solar+storage systems actually are bad deals or the model won’t take the world by storm at some point, but that pitch to investors is tough at this stage of the game. So, that’s the broad issue, but there are solutions moving solar+storage forward despite all of the above.

Some of the larger solar+storage deals that are happening are due to a SunEdison or SolarCity funding it themselves to push it out there. SunPower found a successful model in Australia and is working to transition it into the U.S. market.

One intriguing concept emerged from Sharp Electronics at Intersolar NA in July: A 10-year performance guarantee. By creating this guarantee, Sharp is removing the question mark from the equation to provide a bankable and financeable product. If guaranteed demand reductions are not met, Sharp will compensate for the deficit.

“Providing a performance guarantee to reduce risks for early adopters is critical at this stage of the market,” says Kirk Stokes, energy systems and services group director of sales for Sharp.

The guarantee for the SmartStorage system is made possible because of backing, both by the trusted brand power of Sharp and by the underlying technology and decision-making.  The key to the latter derives from 15-minute interval data.

“The SmartStorage system predicts when to charge and discharge,” Stokes says. “We design a system for a site using a year’s worth of operational data. Currently, California has 15-minute interval data readily available. Having timely data gives a true representation of demand usage. We can determine the sizing for the system based on the interval data, and we can simulate how the system would perform in real-time using our proposal tools. Based on the historical operational profile, we can determine how many kWh is the demand threshold and set the target clip level.

Once we have the target threshold for the site, if the energy consumption rises to that point, the battery is discharged to offset. The system re-predicts throughout the day based on the state of the battery and the historical performance of the system.”

The calculations using a year’s worth of that 15-minute interval data is enough for the Sharp team to know if their solution will add value and make them confident in the 10-year performance guarantee. If the equation doesn’t make sense, then Sharp will simply decline the business. Plans like this can help bridge that financing gap, but they can also better frame the energy storage market and show the value such a system brings beyond just peak shifting.

“There is a level of educating the market that needs to take place,” Stokes says. “Utility rate structures, which bill separately for demand and for energy are not typically well understood by customers. Many customers do not have a good understanding of what contributes to their utility bill and how deployment of these demand management systems can reduce their costs.”

Even further, consider the perspective of Jigar Shah, co-founder and president of Generate Capital and keynote speaker at the Energy Storage Association Annual Conference and Expo. He says the breakthrough for storage will come only when it interacts more with the grid, doing things like frequency response, VAR support, T&D deferral and so on.

“That’s the advantage of storage,” Roberts says. “What defines it as a valuable asset on the grid is its flexibility. I think bringing that reality or that info to attendees at SPI is always an interesting conversation.”