You may remember this project first appearing in our Sept./Oct. issue in which we highlighted the importance of the ground screws in completing the project. It was entered into the Project of the Year awards shortly thereafter and received the most votes in the utility-scale category. So, let’s get reacquainted with it, shall we?

Located 45 minutes northeast of Las Vegas is the Moapa Indian Reservation and tribal members of the Moapa Band of Paiutes are motivated to make better, more sustainable use of their available land. As the Dakota Access Pipeline debacle has revealed, the energy sector doesn’t always treat tribal lands with much respect, and the Moapa Band of Paiutes tribal members have fought for years to close a nearby coal-burning power plant that releases coal ash into their land and could very likely be causing a rise in asthma and other health issues.

Pursuing a renewable energy future here is beneficial beyond economic impact because reliable solar energy that closes this coal plant could change lives. 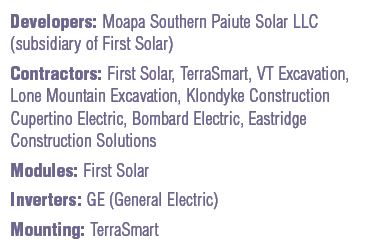 Taming with a screw

The Moapa land is both sacred and severe. The biggest challenge for installing a massive solar array here comes from a soil combination fused together by limestone called caliche, which is typically found in South America.

Encountering a 12- to 24-in. layer of caliche in the United States was an unexpected twist and, to compound the issue, there was about 8 to 12 in. of light sand. This combination was an issue for both typical driven piles and standard surveying methods, and according to project developer Moapa Southern Paiute Solar LLC (a subsidiary of First Solar Electric LLC) both were overcome with the help of TerraSmart solutions.

We highlighted the value of the 128,000 ground screws in Sept./Oct. for being a cost-effective solution that accelerated the installation of the fixed-tilt mounting sysem that supports 3,209,091 modules on 2,000 acres in tough caliche terra.

Because of the loose sand and the requirement to leave as much sacred land unharmed as possible, accuracy was important when pinpointing pile location. So, instead of the standard surveying method of staking points, TerraSmart’s software engineers developed a proprietary software to survey/drill at the project site. This software loaded the rock-drill machines with the coordinates to locate foundation points, and drilling was completed without disturbing unnecessary land and saving money for the developers.

“We were pleased with how respectful the company was of the Moapa land and people,” Moapa Solar stated. “It was unusual for companies to take so much care not to disturb the sacred spaces around the array.”

Check out the other 2016 Project of the Year Winners

Power to the people

The project used First Solar’s advanced photovoltaic (PV) thin-film solar modules and is predicted to generate enough clean solar energy to serve approximately 100,000 homes per year, displacing approximately 178,000 metric tons of carbon dioxide (CO2) annually — the equivalent of taking about 34,000 cars off the road. It will also include an onsite substation and a new 5.5-mile 500-kV transmission line that will connect to the existing Crystal Substation serving energy users in California. Moapa Southern Paiute Solar Project has a power-purchase agreement (PPA) with the Los Angeles Department of Water and Power to deliver clean, solar energy for 25 years.

In the end, the project was delivered on time and on budget and became the first utility-scale solar plant on U.S. tribal lands.