Traditional roofers are migrating toward solar with the help of finance providers.

As solar prices have dropped in recent years, traditional roofers are increasingly turning to solar to boost revenues and diversify their business models. Solar systems are in demand today more than ever before, with all signs pointing toward future growth as homeowners seek relief from rising electricity costs and pursue innovative, eco-friendly energy solutions. 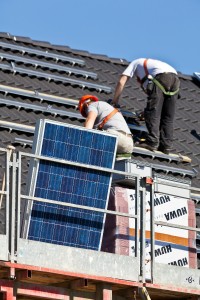 The Solar Foundation’s third annual National Solar Jobs Census (released in November 2012) found that the U.S. solar industry employs approximately 119,000 workers, representing a 13 percent rate of growth over 2011. More efficient business models and dropping equipment costs are helping organizations go solar at a much lower cost, resulting in faster adoption to support this job growth. Those numbers should continue to rise, supporting the nation’s economic recovery, as the industry gains better access to capital investment and continues to add more new jobs than other industries.

“Solar roofing has dramatically increased our revenues and profitability, and the impact of this technology has been tremendous,” says Kevin Dennis, CEO of Champion Domestic Energies, an alternative energy solution provider based in Glendale, Ariz. Dennis’s company also services residential solar installations in Tennessee, North Carolina, Kentucky and Georgia.

Champion Contracting & Restoration, a national company specializing in residential and commercial roofing systems — it completed more than 4,000 roofing installations nationwide last year — launched Champion Domestic Energies almost two years ago in response to increased demand among homeowners for smarter energy solutions amid rising energy costs. For example, the California Solar Initiative (CSI) reports that more than 70 percent of all solar installations throughout California in 2012 was expected to be the direct result of a lease agreement.

To that end, according to research released by the California Energy Commission, approximately 91 percent of Californians view energy efficiency as an important factor when considering the purchase of a new home. About 70 percent of those surveyed said the cost of the monthly electricity bill impacted their decision to buy a new home. About 81 percent believed that a solar electric system allows homeowners to start saving on monthly living costs immediately.

Partnering with OneRoof Energy has resulted in greater sales for Champion as residents appreciate the long-term protection of a fully guaranteed lease. Through OneRoof Energy’s SolarSelect Financing Agreement, homeowner customers can finance aesthetically pleasing solar electric systems with an industry-leading, 20-year warranty for as little as zero down, removing the high up-front capital investment and ongoing maintenance. 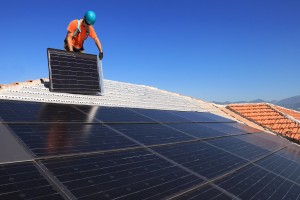 “We’re seeing about 80 percent of our solar sales in retrofitted installations, not just new roofs. We help residents lock in an affordable energy rate with a single unified warranty and help them achieve energy independence,” Dennis says. “By using historic data from local electric companies to demonstrate the significant energy savings that solar delivers, we’re showing homeowners how to set themselves apart if they ever want to sell their homes down the road.”

According to a 2011 study by Lawrence Berkeley National Laboratory, solar installs can increase home values and shorten the sales cycle. The data shows that, on average, a home solar system adds about $5.50 per watt to a home’s resale value. On existing homes, solar panels increased resale value by more than $6 per watt. On new homes with pre-installed solar, the solar panels increased resale value by approximately $2.30 to $2.60 per watt. Additionally, the U.S. Department of Energy’s Office of Energy Efficiency and Renewable Energy shows that solar homes sell twice as fast as homes without panels, even in depressed markets.

Through its collaborative model, OneRoof Energy has created alliances with hundreds of roofers and installers in markets across the country. The company has received more than $50 million in funding from key investors, including long-time partner Hanwha International, and expanded staffing by 400 percent at its headquarters in recent months. Roofing partners like Champion Domestic Energies are also experiencing economic growth, made easier by OneRoof Energy’s flexible financing options.

“Many new markets are opened that we previously could not access, and we’re planning to target seven additional states during the next 12 months,” says Dennis, noting that his new solar division had sold about 48 solar systems in the past two months alone. “By the end of 2013, we’re projecting that 50 percent of our entire annual revenue will come from solar roofing.”