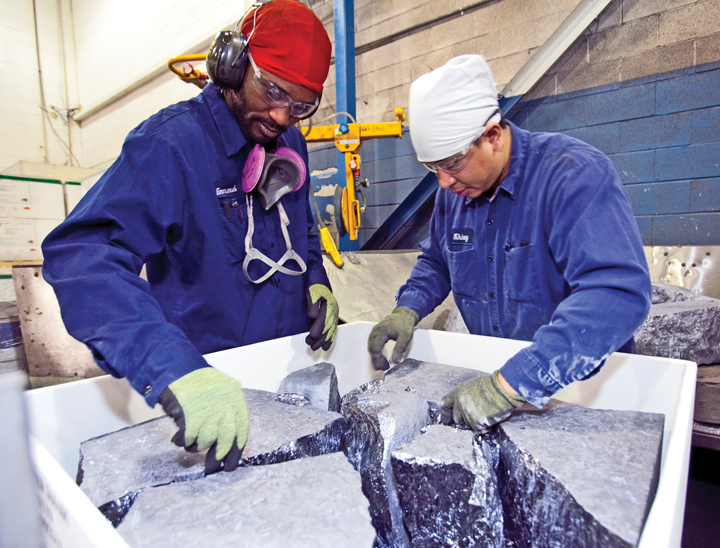 A simpler method for purifying silicon could cut energy use in purification by two thirds. Photo credit: Silicor Materials.

Lower costs and a better environmental track record benefit the entire solar industry. Yet downstream solar is where cost reduction opportunities often seem the largest and where environmental sustainability pressures appear most acute.

Developers are faced with a range of options for bringing down the cost of solar. They also face pressure from local communities to ensure that solar installations don’t harm the natural environment. In the face of these pressures, it is valuable to remember that cost and sustainability need not be confined to downstream solar — innovations are also ongoing in upstream solar.

It’s All Downstream from Here

Recently, I have noticed an industry-wide focus on decreasing balance of systems (BOS) costs and soft costs in solar. This is an exciting area of the industry that sometimes overshadows upstream solar.

In June 2016, GTM Research named soft costs as the biggest opportunity for solar cost reduction, over any other part of the solar supply chain. Attention-grabbing downstream innovations such as drones, new advanced tracking technology and AC panels all show that new solutions abound for bringing down soft costs and BOS costs. Recently, several large companies have articulated their intentions to prioritize BOS and soft cost reductions, with First Solar announcing a plan to bring down soft costs and BOS costs as quickly as possible and an announcement from residential solar company Verengo that it is “focusing on reducing soft costs” going forward.

Despite popular belief, upstream solar — especially solar module manufacturing — is ripe for cost reduction if upstream solar companies pursue innovation. Additionally, solar manufacturing must also take responsibility for its environmental impacts. Improvements in cost and environmental sustainability on the upstream side can help solar thrive and improve the whole industry’s reputation for sustainability.

There are still cost savings to be had in upstream solar. The costs of manufacturing solar modules contributes about half of the overall PV price per watt of solar, according to GTM Research. Although the cost of multicrystalline silicon photovoltaic modules recently dropped to an all-time low, at 43 cents per watt in 2016 (down from $4 per watt in 2008), the rate of price reduction for solar modules is slowing, and innovation is necessary for continued gains into the future.

One key area where the upstream solar industry can cut costs is in the purification of silicon. Silicon is the most expensive part of a solar module. Today, 90 percent of solar modules are made using electronic grade (EG) silicon, a type of silicon that was originally engineered 50 years ago for use in semiconductors for consumer electronics. This silicon is intensively processed, increasing its costs. However, new technology is now making it possible to purify silicon more simply, in a way that is tailored for use in solar cells. This simple method can reduce capital costs for silicon manufacturers and materials costs for solar module companies, leading to savings across the industry.

The traditional silicon purification processes are also the source of environmental problems in solar. Purifying silicon takes a significant amount of energy. Using traditional methods, it takes up to 125 kWh to make a single gram of EG silicon. The world’s growing silicon market is projected to expand $4.7 billion in 2015 to $8.9 billion by 2021, driven in large part by the growth of solar. Thus, energy savings in upstream solar, and silicon specifically, are important if solar is to be a truly sustainable industry as it grows. Various harmful and toxic
by-products are associated with EG silicon purification: toxic gases, like silane and tetrachlorosilane, and tetrachloride — a toxic and combustible substance. There is a need for continued innovation in upstream solar to reduce the problems of toxics, pollution and carbon emissions.

A simpler method for purifying silicon could cut energy use in silicon purification by two-thirds and avoid the problem of toxics in the process. Silicor Materials, the company I lead, is commercializing such a process now. If more efficient purification processes are adopted and spread quickly throughout the industry, it will lead to lower cost materials and more sustainable manufacturing, which will in turn benefit the entire industry.

Despite all the activity in downstream solar, upstream solar can’t be forgotten in the push for a more efficient, sustainable industry. Solar developers and installers can help accelerate the transition to simpler practices in upstream solar by demanding that manufacturers use the best practices in the industry for the benefit of all.

Theresa Jester is the CEO of Silicor Materials.