A lot of work goes on underground to transport solar electricity from up above.

In a state where the average temperature approaches 90° and many days soar well beyond 100°, there is no shortage of sunlight available. In the sunny, cactus laden landscape of Arizona, businesses are continually finding ways to harness the region’s solar abundance.

Two of these forward thinking companies are Desert Boring and SolarCity, and they have found a way to work together to capture and convert solar power in a unique fashion. 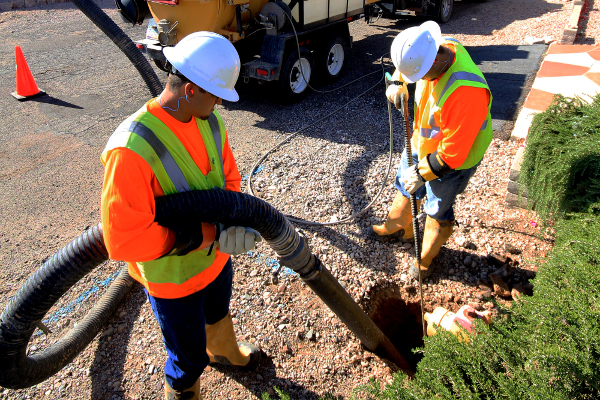 Started in 2006 as a subcontractor for telephone and power companies, Desert Boring, based in Coolidge, Ariz., began with just one horizontal directional drill (HDD) and one vacuum excavator for underground work. One of the founding partners was Mike Magill, who remains one of the primary owners and operators of the company.

“We are a relatively small company,” he says. “We don’t have a large staff or large facilities. We typically have two crews of workers that are very dedicated and proud of the work they do. It helps that when we go to a jobsite, our customers are getting the owner of the company right there.”

Despite operating with a smaller number of employees than other boring companies, Desert Boring is still able to specialize in a number of different areas; the company has the capacity to dig pits, horizontal boring, private locating and potholing.

Magill and his team have steadily grown the company over the years, branching out from doing utility drops for a sole contractor. With a larger, updated fleet of Vermeer drills and Vermeer by McLaughlin vacuum excavators, Desert Boring has been able to find a niche for quality work, even with a small workforce.

SolarCity is on the opposite end of the business spectrum. The company is the nation’s leading solar energy company, with power system design, financing, installation and monitoring services for everyone from homeowners to businesses to municipal buildings. While the company has only been around since 2006, SolarCity has a presence in 14 states and Washington, D.C.

Carports and shade canopies are popular solar installation platforms for SolarCity. On each installation site — which has often been schools and large commercial buildings — there are multiple canopies. Each canopy is combined into a large conduit that then runs to an inverter. Boring companies like Desert Boring make the holes in the ground for the conduit.

With the meticulous nature of these projects and the technology needed to maximize the energy from the solar power, all parties involved are very methodical in their approach. It all begins with an engineered set of plans that details specifics of where the structure is going to go, where the inverters will be placed and the projected running lines that go from each canopy to the connection point.

After examining the plan, Magill will head out to the jobsite and personally inspect the details outlined in the plan. During this job walk, he collects exact measurements to ensure that everything will work as well in the real world as it does in the conceptual design.

“I take a very close look at the job and sometimes there are things that may make sense from an engineering standpoint but may not be as effective once we are out in the field,” Magill says. “We then have to give them feedback stating that it would be much easier and cost-effective to combine certain canopies, as well as adding or eliminating bores.”

Potholing is a key step in the underground construction process. The excavation method — which Desert Boring accomplishes with Vermeer by McLaughlin vacuum excavators — allows the crew members to visually locate utility lines or underground obstacles by removing soil, water and other debris before any boring or trenching is started. This is a critical step in reducing the risk of damaging other utilities.

Among the biggest companies to utilize solar canopies in Arizona is Walmart. The retail giant has installed the canopies in its parking lots at stores across the state. It is on these large jobs that the solar energy company calls Desert Boring.

“We did a project in Tucson at their Walmart, and it was very large,” Magill says. “We performed over 1,000 ft of directional drilling for three 4-in. conduit. In order to get all of the power from all of the parking structures combined, we had to directional drill from one end of the property to the other.”

One Call is typically a very accurate method for locating on public jobsites, but on private lands and jobsites, other locating methods need to be incorporated. For Desert Boring, McLaughlin has locators always on hand to help determine where existing utilities are running.

While locating is often the most effective method for finding the utilities, slot trenching is also incorporated to help determine the existing lines. Desert Boring will cut a trench a few inches wide and as deep as the utility lines need to be. This method has been particularly effective for finding lines at some of the area’s older schools.

Walmart provides a great deal of the solar canopy work, but Desert Boring has also worked with SolarCity at eight schools in the past year. It is at these schools where the boring company encounters older water lines running to and from the meter that often require the use of slot trenching.

“When we see those lines, we know we have to cross it so we’ll make a slot trench. The slot is only a few inches wide and a few feet deep, but through that trenching process we verified that we were safe at that depth,” Magill says. “Once a safe depth is determined, the boring crew begins installing the conduits.”

As long as the Arizona sun keeps shining, solar power remains a viable energy source for the state. The innovative thinking of companies like SolarCity, paired with the utility installation expertise of companies like Desert Boring, and the state’s ability to keep harnessing the heat, is looking brighter.