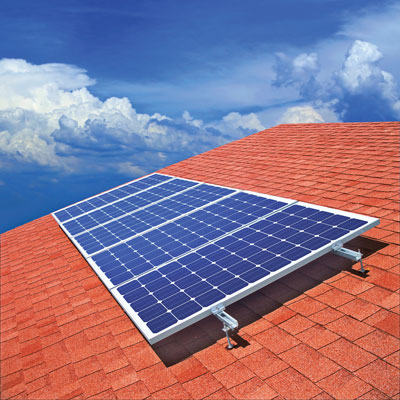 The rooftop solar PV permitting process involves a number of steps and varies greatly, even between neighboring cities. Jurisdictions follow state or national codes, but each may interpret the codes in their own way and insert additional requirements. In some locations, a rooftop structural analysis conducted by a professional engineer is required before a rooftop solar permit is issued. The extra step is not universally applied across states or municipalities and can alter scheduling logistics and add hundreds of dollars to the cost of the system.

“Throughout a project I oversaw to create a regional solar permit checklist for residential systems, I noticed that some plan reviewers automatically require plans stamped by a structural engineer, regardless of the structure’s condition,” says Laura Machala, solar energy coordinator at Mid-America Regional Council. “The unnecessary application of this requirement slows down the permitting process and adds considerable cost.”

The fact that engineering analyses are required in some jurisdictions and not others can cause difficulties for solar installers who work across boundaries. It also unfairly penalizes homeowners in certain locations, adding sizable permitting costs that may not be required in neighboring jurisdictions.

“I’ve experienced engineering costs that range from $250 to $500 to review, perform calculations and stamp a set of drawings for a standard residential structure,” says Chris Giannoumis, resident engineer, NABCEP-certified Solar PV Installer and Technical Sales, Standard Energy Solutions LLC. “For system sizes less than 10 kW, this cost ranges anywhere from 2.5¢/watt to 10¢/watt. This amount will likely increase exponentially if there are necessary revisions and site visits from the PE, which will certainly increase internal costs for personnel and additional trips to the AHJ for resubmission.”

The U.S. Department of Energy’s Solar Energy Technologies Office has taken a keen interest in solar permitting costs. The DOE notes that non-hardware “soft costs,” such as permitting, inspection and installer costs, now comprise up to 64 percent of the total price of residential solar energy systems. An industry study found that local permitting and regulatory processes can contribute up to $2,513 in additional costs to a solar system. Cost reductions are necessary to achieve the SunShot Initiative goal and reduce average soft costs to 65¢/watt. To address this issue, Sandia National Laboratories conducted a series of DOE-funded tests to evaluate the structural behavior of common residential roof structures. The effort involved a wide range of destructive tests on scaled wood structures. Sandia stressed the structures to the point of failure while producing and capturing data on the actual rooftop load capacity.

Limitations of the Structural Analysis

The system effects of the rafter, sheathing and nailed or glued connections add strength to the structure but are not factored into the structural engineering analysis. Photo illustration: Stephen Dwyer, Sandia National Laboratories

A thorough look at the methodology behind a typical structural engineering analysis helps clarify the difference between the actual load a rooftop structure can support and the load calculated during such an analysis. When engineers analyze rooftop strength, they typically calculate stresses on the basis of an individual beam, rafter or truss. This reflects an assumption that each piece of the structure acts alone, an oversimplification that doesn’t evaluate the rooftop system as a whole or consider the load-sharing and load redistribution effects of a roof system.
The solar PV and racking system load isn’t supported solely by the rafter below it. The load is deflected and distributed to the next rafter, and the next, and so on. The load-sharing effect is significant, yet it is ignored in the standard engineering analysis.

Some conservatism in the structural engineering analysis is appropriate in an industry where safety is a top priority, but it is important to consider that the conservative analysis is layered on top of an already stringent building code that uses highly conservative stress values for wood. That means the calculations to estimate wood rooftop load capacity include multiple layers of conservatism, resulting in an excessively cautious estimate — one that is not representative of real conditions.

Sandia’s comparison of the actual rooftop capacity data collected in the study vs. the load capacity calculated during the engineering analysis revealed a large discrepancy. On average, rafter-based tests demonstrated that rooftops could support load capacities 330 percent greater than indicated by the National Design Standard.

“This is exciting news for residential PV installers in jurisdictions where PE stamps are required by default,” says Andrew Truitt, NABCEP-certified installer, Dividend Solar. A roofing system is exactly that — a system — and it should be treated as such when considering its capacity to bear attached loads. This study shows that a typical residential roofing system’s capacity to bear the additional load of a PV array is much higher than expected, and installers, engineers and other stakeholders should make sure that any AHJs that still require PE stamps for residential systems are aware of the study’s findings.”

Safety is and should remain a top priority of the building industry, but there is a cost to homeowners, solar installers and the solar industry when solar PV permits are unnecessarily rejected and PV installations are canceled. The results from Sandia’s study shed new light on the additional benefits of composite action and load-sharing effects. In turn, the results create questions about the use of the commonly accepted engineering analysis to deny solar PV permit applications. The excess load capacity data collected by Sandia suggest that a well-built home that meets local building standards and has not been adversely modified or damaged has adequate load-bearing capacity to support a roof-mounted PV system.

Stephen F. Dwyer is a Ph.D. and P.E. for Sandia National Laboratories. For a full report on the tests mentioned in this article, click here.