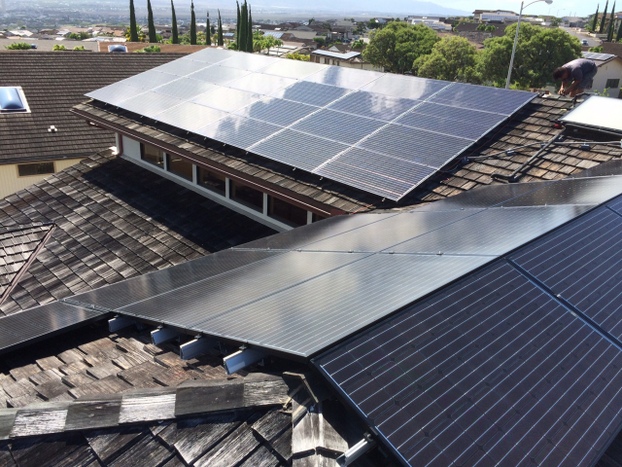 A multi-year effort has been ongoing in California to update technical requirements for connecting Distributed Energy Resources (DER) to the grid, known as Rule 21. The experience of Germany was cited as one reason to take action. In Germany, significant grid destabilization problems arose when high penetration levels of solar PV were reached because most of these DER were required to trip off within fairly small frequency tolerances. Not all existing PV inverters had the firmware capability to change the frequency trip setting wide enough to allow stable operation of the grid. Thus, site visits were needed across the region in order to update the firmware and/or change the frequency settings retroactively.

Seeing the need for not only frequency tolerance but grid supportive functions in general, the California Public Utilities Commission and the California Energy Commission convened the Smart Inverter Working Group in early 2013 to start developing recommendations of technical requirements for inverter-based DER in California.
January 2015 rolled around before Rule 21 was actually published with these “Phase 1” changes. Today, UL 1741 Supplement A is yet to be published, but the balloting process is underway and will hopefully see publication in mid-2016.

The following functions are the mandatory functions that will be required in new inverters. Many of these functions will allow for a larger installed capacity of PV systems in any given area, but on the other hand, some of these functions, if activated, can affect real power production and system performance over time, which deserves investigation.

Voltage ride-through is used to keep large amounts of DER from tripping offline during a short-duration voltage event. Transmission and distribution faults (e.g. ground faults) can cause voltage to dip or swell before fault-clearing devices on the power system act to restore normal power flow. If DER makes up a significant part of the total generation serving an area, loss of the generators could delay voltage recovery or cause further frequency instability.
The new Rule 21 has extended the existing voltage trip times to a great extent. A new ride-through requirement curve is then defined inside the disconnect curve, which describes the voltage and time limits to which an inverter must ride-through. Between the ride-through and trip curves, the equipment capability is not defined, and the inverter may take either action. 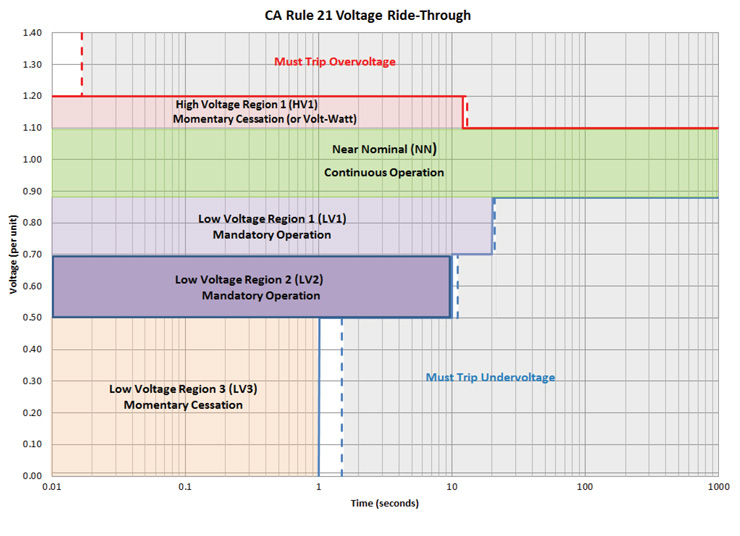 The Volt-Watt function is allowed as an alternative to momentary cessation in the HV1 region given agreement by the utility. Volt-Watt decreases real power as a function of increasing voltage.

Since frequency is a system-wide parameter, meaning it is the same for all interconnected areas of the power system, it has the ability to affect a wide area of distributed generators. Traditional limits placed on inverters caused them to trip offline when outside a fairly small window around nominal frequency. There is little benefit to trip DERs when frequency is low because low frequency means there is insufficient generation in the system already.

RELATED: How inverters are changing PV systems with bundled services

Since so much generation can be tripped offline at once if similar frequency trip settings are used across a wide area, even tripping from high frequency (too much generation) can cause issues. Learning from the German experience, California Rule 21 includes ride-through of off-nominal frequency excursions. This will keep inverters operating for as long as possible before tripping due to frequency to continue producing kWhs while supporting the grid during frequency excursions (Fig. 2). 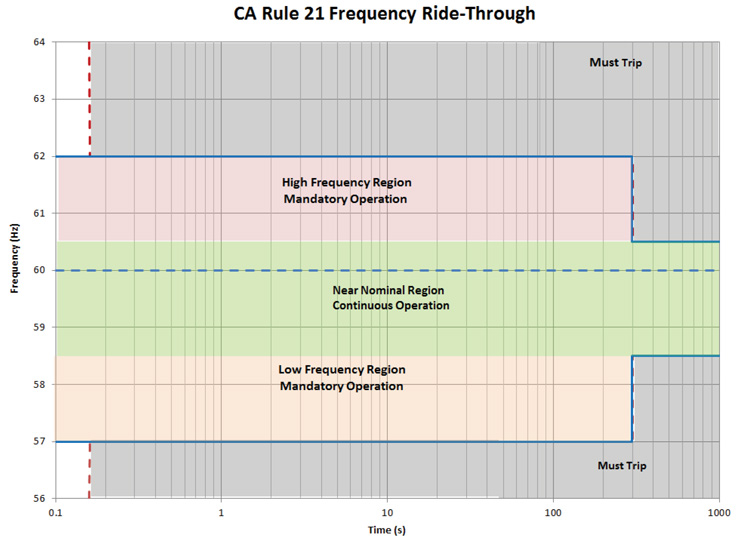 A Frequency-Watt function, which reduces real power on overfrequency, is also allowed to be used given agreement by the utility.

Reactive power (Q) output can help compensate for steady low or high voltage on the grid near the location of the inverter. When real power is fed back into the grid from an inverter, the voltage at the point of connection can rise due to the output current flowing through the grid impedance. Power export such as this can occur whenever the load served at the PV system site (if any) is less than the power produced. For example, at peak sun hours on a sunny day, residential PV systems might be producing much more power than the home is using while the occupants are gone.

Under high penetration scenarios with many inverter systems feeding power into a circuit, the voltage in the area can rise and potentially exceed power quality thresholds or trip the inverters. Absorbing reactive power (operating in an inductive or underexcited state) helps to reduce voltage much the same as inductive motor loads draw down voltage. If an area has low voltage, inverters can supply reactive power (operating in capacitive or overexcited state) to help raise it, similar to how capacitor banks work. PV inverters typically have both these capabilities.

There are many possible ways in which to control reactive power output. One is to use a set power factor, which is the ratio of real power (Watts) to apparent power (Volt-Amperes). Inverters actually control the phase angle between the output current and grid voltage, creating reactive power whenever the waveforms do not align. The cosine of this phase angle is similar to displacement power factor which does not account for harmonics in the waveforms. A typical range of adjustability for Fronius residential inverters is 0.85 – 1.

Due to the maximum current limitations of inverters, increasing reactive power can reduce the maximum output power available. Utilities generally pay only for the real power produced. If there is not a rate structure to account for the reactive power produced, then there can be revenue losses for the PV system owner unless an inverter with higher apparent power capability is used. If a utility requires a system to keep a set power factor, a larger inverter may be needed compared to a system that maintains unity power factor.

For instance, a power factor of 0.9 would require an 11 percent larger inverter to reach the full real power output of an inverter operating at power factor 1. Rule 21 requires the capability to go down to a power factor of 0.85 for systems greater than 15 kVA and 0.90 for systems 15 kVA or less. The actual setting may be determined during the interconnection process. Luckily, such a low power factor may never be necessary, but the system designer should be aware of and account for this reduction in peak power output. Operating at less than unity power factor can increase initial system costs and put more wear and tear on the inverter components due to the increased current demands.

Changes in reactive power output in relation to voltage can help steady an area’s voltage if it is fluctuating due to intermittent loads and generation. Balancing grid voltage with reactive power output can be done using a control algorithm such as that illustrated by the curve in Fig. 3. 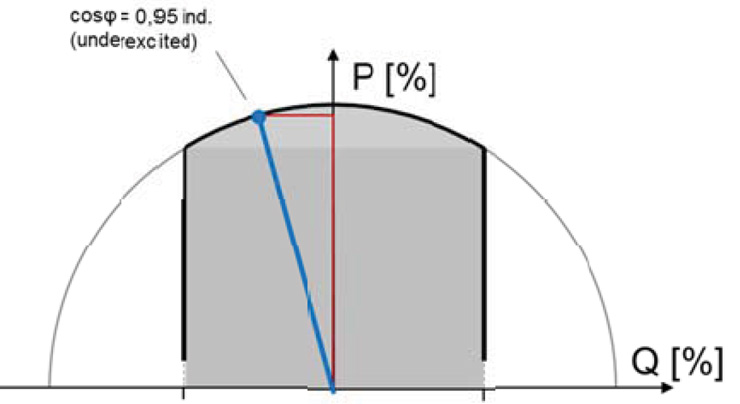 There are many possibilities for configuring such a curve, and today Rule 21 does not have any default parameters for the function. The concerns of revenue, inverter sizing and wear and tear apply here as with fixed power factor. For example, if a deadband (the flat part of the curve around nominal voltage) is used that is insufficiently wide, or if a very steep slope is specified, the inverter could remain forced into reactive output mode by inherently high or low voltage on the lines. The inverter will react to those voltages which may or may not be caused by the presence of PV output.

Ramp rates limit the inverter’s power increases over time. Rather than abruptly changing from one power level to another, ramping allows coordination of grid control functions without large fluctuations that might cause oscillations or excessive action of control components. Ramp rates may be defined as “normal,” used under continuous output conditions, or “soft start,” used when the inverter first connects to the grid and commences power production or after a trip due to a grid disturbance. While ramping smooths the output power over time, excessively low ramp rates could cause energy losses. Rule 21 includes a default normal ramp rate of 100 percent, which should effectively remove any effect on maximum power point tracking. The setting for soft start should be determined during the interconnection process. The soft start rate is less critical in terms of production as it will generally only be used upon first startup in the morning when the power is low.

In general, any of these changes will allow for higher penetration levels and thus benefit the PV industry, but care must be taken that revenues are not unduly affected.

Brian Lydic is the Sr. Standards and Technology Engineer for Fronius USA.