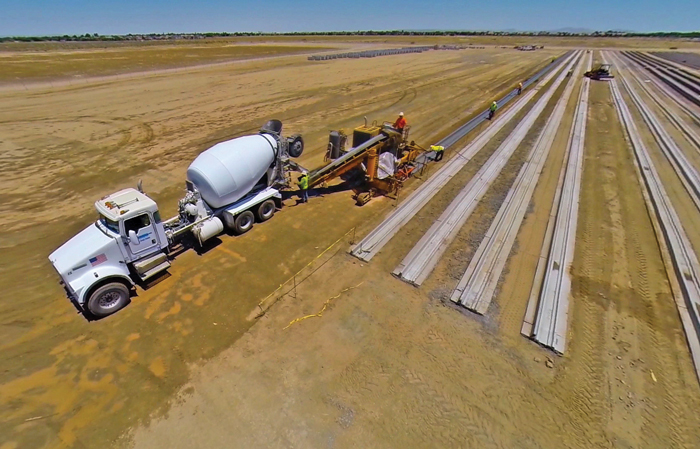 Robots in the solar industry are still a bit of a novelty out in the field, but Alion Energy of Richmond, Calif., has just rolled out its second generation robotic panel placement unit — the Rover 500 — that will help cut the cost of brownfield installations by around 20 cents per installed watt.

“We can do a brownfield installation with our technology for a few cents less than what a standard greenfield, fixed-tilt ground-mount system would cost,” says Jesse Atkinson, vice president of marketing and business development at the company. The new Rover 500 is capable of installing 500 kW per day, based on a two-shift operating day, he says. The old generation Rover 200 was only capable of 200 kW per day.

“Because we have a fully ballasted system, we are finding strong interest for brownfields and other sites where penetrating the ground is either prohibited or problematic, such as rocky and corrosive soils,” says Atkinson. “It’s not just that we avoid posts penetrating 10 to 12 ft under ground, it’s also the consideration of total weight and load spreading that are key considerations at brownfields.” 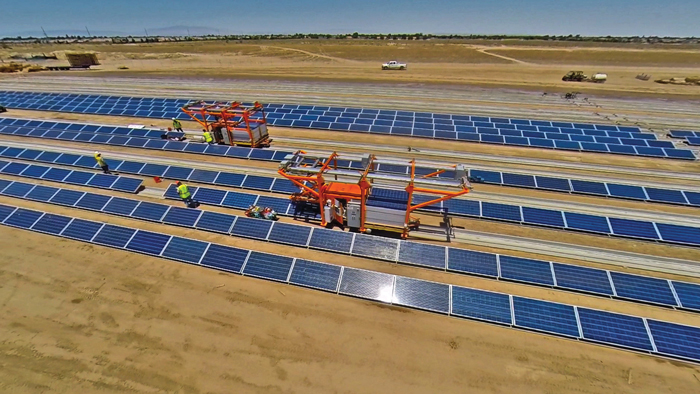 Brownfields may refer to old EPA sites, less toxic industrial waste sites, municipal dumps or unused and untillable land. The EPA estimates there are 400,000 brownfield sites in the United States with “the presence or potential presence of a hazardous substance, pollutant or contaminant.” PV penetration of this niche seems only to be beginning. The number of municipal landfills in each state is more difficult to count, since many have been closed. New Jersey, for example, has more than 800 closed landfills and an estimated 10,000 brownfields, according to a local utility.

Installation and Maintenance
The Alion system involves a field-extruded 3,000 psi concrete rail system onto which standard PV modules with fold-down legs are placed by the new second generation robot into epoxied slots.

“Our concrete extrusion process and automated installation machines eliminate the cost penalties typically associated with building ballasted systems,” Atkinson says. That ballast element of a standard installation can cost up to $0.20 per installed watt, he notes. “The solar modules with the new system install two-and-a-half times faster and with a 20% reduction in concrete volume.” 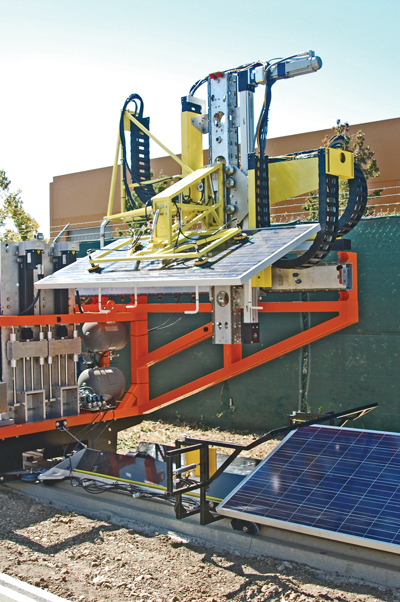 Much of the cost savings of the Alion system is in the reduction of installation hours achieved by robotic labor. “Normally we operate with about a dozen people to pour, run wires and install the panels; a typical installation would require three or four times as many people. So we can achieve about a 20% cost savings in BOS labor cost,” Atkinson says. “And we are faster than traditional installs, with the capability of building 50 MW in 13 weeks, versus an estimated 20 weeks for a standard installation workforce.”

Once the system is in place, a separate robot, named Spot, rolls along the rail section cleaning the panels at an annual service cost of $2,000 to $3,000 per megawatt installed. In a basic block of eight or more rows, a single Spot can be repositioned to adjacent rows through a screw-drive mechanism mounted perpendicular to the end of the rows. “Our automated cleaning vehicles eliminate any added soiling losses resulting from locating projects in industrial areas,” notes Atkinson.

Partnerships and Projects
Other functional areas of building a solar power plant are being conducted through partners like S&C Electric, based in Chicago. S&C and Alion agreed in February “to mutually construct ground-mounted solar power plants incorporating their respective industry leading technologies. This combination of proven EPC bankability, best-in-class electric power switching, protection and storage technologies with disruptive robotic installation and cleaning efficiencies, further enhances the cost competitiveness of ground-mounted solar generation,” the companies announced at the time.

The company’s first large-scale project, a 3.8-MWdc array, was recently installed near Lancaster, Calif., with close to 13,000 Trina Solar modules on a 20-acre field. The energy is being provided to Southern California Edison under a pair of PPAs at a nominal rate of $94/MWh. Because the time-of-day PPA considerations were more important than levelized cost of energy (LCOE), the tilt was set at about 8° off of an optimal LCOE angle.
“We now are looking at a number of brownfield sites on the East Coast, and in other states, like Michigan,” says Atkinson.

Built at a cost of about $500,000, pairs of the robots will only need to be stationed regionally for the company to provide national-scope services. “We can make a robot in about a month, but we don’t want to have to make too many of them,” Atkinson says.

“We are also looking at international markets including Chile and Saudi Arabia,” Atkinson says. To streamline the planning and execution stages, Alion is seeking to develop strategic partnerships with EPCs or large construction companies specialized in brownfields or sites with similar special requirements. The concrete rail system can climb an 8% grade in order to compensate for irregularities in the soil topography and even inject additional concrete to fill in shallow spots under the rail level.