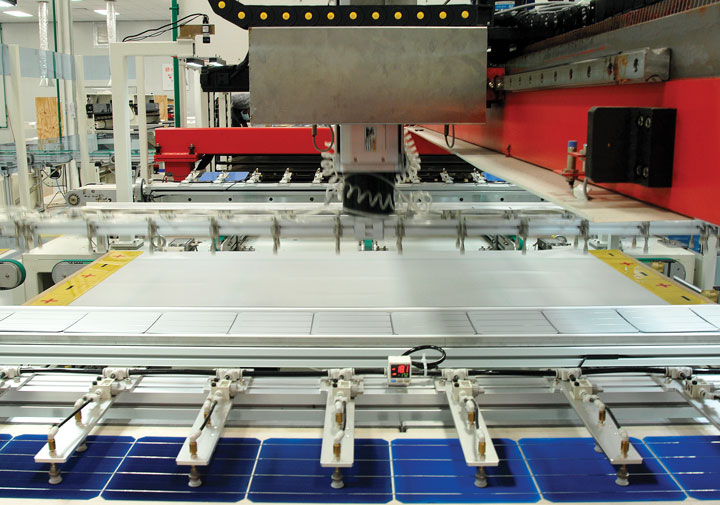 At its Jackson facility, 25 percent of the Seraphim workforce comprises military veterans, including the operations and production staff.

Being a large, vertically integrated manufacturer for cells and modules was a solid business practice at one point, and may be again, but that is not the case in the current market. As is often the case aboard this solar coaster though, when one or two companies dip, one or two more start rising.

This is why we wanted to learn more about Seraphim USA — a domestic, pure-play PV module assembler that entered the market in the second quarter of 2016, producing modules out of a 160-MW facility located in Jackson, Miss. The company is already in the top three in terms of U.S. production at scale.

You may be familiar with the Seraphim brand name, which has been up and running in China since 2008 (roughly 6 million modules worldwide), but other than licensing the technology and leveraging the brand name, Seraphim USA is its own independent company, launched by a U.S. venture capital group that saw an opportunity.

When the group looked at forming the company, there was about 1,600 MW of total module manufacturing capacity in the U.S. — representing about 20 percent of total demand. And with the projected growth to 2020, and with the U.S. becoming the second-largest solar user, the Seraphim team saw an opportunity because “supply needed to come back domestically.”

“We could produce under any label; we toured 16 different module facilities, and Seraphim was above the rest,” says Andrew Fuselier, COO of Seraphim USA. “We struck a deal to license the technology to bring it to the U.S. Because we are coming to market with a proven technology, with a partner that’s been in the market for a long time, we have instant tier 1 bankability.”

Why is Seraphim expanding at a time when larger U.S. module players are struggling?

“We saw too much risk in actually extending cell manufacturing here,” Fuselier says. “We have the capability, but we chose not to in order to hedge against what happened. We were lucky we chose right. We want to let the market float the price of cells and have a diversity of suppliers so we don’t get tied to that. Our analysis says there will be a need for about 4 GW of U.S. production to support market demand by 2021.”

“We had no real belief that the trend would shift heavily,” says Steve Ostrenga, VP of sales for Seraphim USA. “But then 30 to 40 percent of the module market globally crashed, and a whole new segment of available markets opened up just because of extreme price dropping.”

Seraphim suddenly had more utility interest the last three months than they had anticipated for the full year. The company is already prepping for expansion but remains focused on residential and C&I segments.

“Developers and EPCs are willing to pay a small premium for module certainty,” Ostrenga says. “That’s our message to the market. We’re going to have them available. They won’t get stuck anywhere and you won’t be at the whims of the global market.”

Its location in Mississippi is key here, which allows for quick shipping times to both the East and West coast.

“We can get product out quickly, which saves on costs and lets installers schedule more appropriately,” Fuselier says.

But speed is nothing if the product fails. Another crucial service component is Seraphim’s PowerGuard insurance policy, which insures the system for the 25-year warranty. So, if the solar coaster happens to claim Seraphim as a victim at some later date, something is still standing behind that warranty.

Taken together, these services have caught the eye of Sunnova and Sungage, which both recently began sourcing Seraphim modules. Soon, they might catch your eye as well.