Third-party financing of solar PV has become the predominant business model in some of the largest residential markets in the United States; today, third-party financed residential installations comprise greater than 50 percent of new residential solar capacity in California, Arizona, Colorado and Massachusetts, with the model gaining greater market share in other states such as Connecticut, Delaware, Maryland, New Jersey, New York, Oregon, Texas, Vermont and Washington. 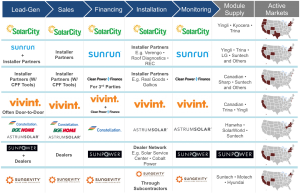 GTM Research, the leading solar market analysis and advisory firm in the United States, released U.S. Residential Solar PV Financing: The Vendor, Installer and Financier Landscape, 2013-2016. This 21-page report provides an integrated look at the vendors, installers and financiers offering residential solar financing across the United States. The report analyzes the leading vendors and their business models, the strategic relationships and market shares of third-party residential installers as well as the financiers that are capitalizing on the market. In addition, the brief examines the total addressable residential market in the United States with forecasts through 2016.

“Prior to 2010, there were few residential third-party ownership (TPO) vendors,” said Shayle Kann, Vice President of Research at GTM and the report’s author. “Since then, the success of companies such as SolarCity, Sunrun, and SunPower has led to a spate of new entrants into the market. Today, we count at least ten TPO companies operating, and a number of others still getting off the ground.”

“Each company has introduced its own unique version of the residential financing model,” Kann added. “These vendors differ in their services, their relationships with solar installers, their geographic footprints, their financing sources, and their customer acquisition strategies. As a result, there is now a vibrant competitive market for third-party owned residential solar in the U.S.”

— There have been 28 individual funds raised for residential solar projects totaling over $3.1 billion. U.S. Bancorp has been by far the most prolific investor, providing fourteen funds and over $1.35 billion to the market. Eight other financiers have been active in the market.

— The four largest providers of residential solar leases in 2012 in California were Sunrun, SunPower, SolarCity, and Clean Power Finance

For more information on this report and to purchase a copy, visit: www.greentechmedia.com/research/report/u.s.-residential-solar-pv-financing