Solar on its own doesn’t do much to fight demand charges. The report, Solar + Storage Synergies for Managing Commercial-Customer Demand Charges, seeks to assess the incremental demand reductions from adding behind-the-meter storage in conjunction with solar. To do so, the study estimates demand charge savings from solar + storage systems based on simulations across a large number of commercial building types and locations, over a multi-year period, with varying solar and storage system sizes and a range of demand charge designs. 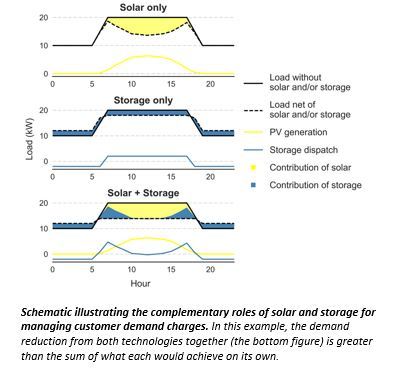 • Solar + storage exhibit consistent synergies for demand charge management. In nearly every simulation, solar + storage co-deployed in commercial buildings result in a greater demand reduction than the sum of what each would achieve alone. The greatest synergies occur for buildings with broad daytime peak loads that extend into early morning and/or evening hours (as shown in the schematic above) and for locations with a high degree of intermittent cloud cover where storage can buffer transient drops in solar production. The strongest solar + storage synergies in our analysis were found for hospitals and office buildings, and for most building types in Miami, though these are not necessarily the cases with the greatest absolute level of demand reduction.