OK, so it’s never not a pivotal time for the solar industry, it seems, but The N.C. Clean Energy Technology Center’s most recent report does highlight the importance of this current moment in terms of dictating the value of PV to homeowners into the future.

The aggregated data within the Q2 2017 edition of The 50 States of Solar paints a picture of a widespread net metering sea change happening across the country. This isn’t necessarily a bad thing, but much of solar’s rise at the residential level has been linked to that framework. So, if it’s going to change, a lot depends on who is defining “the value of distributed generation” and what information they are using in their methodology.

“There seems to be a movement from net metering toward alternative compensation structures that are based on the value distributed energy resources provide to the grid,” said Achyut Shrestha, Senior Policy Analyst at NCCETC. “How these proceedings play out will have an important impact on state solar markets.” 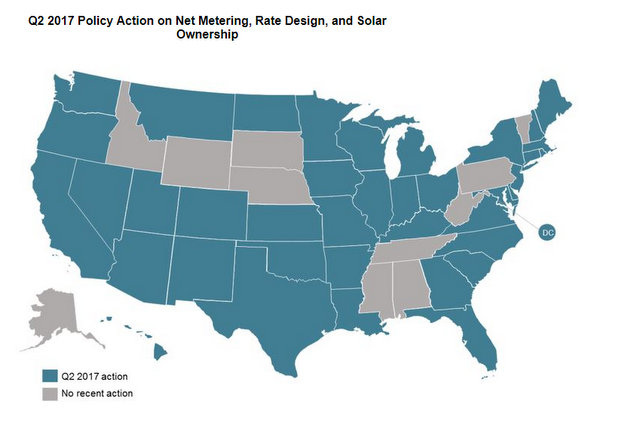 • 42 utility requests in 25 states plus D.C. to increase monthly fixed charges or minimum bills on all residential customers by at least 10% were pending or decided.
• 24 states considered or enacted changes to net metering policies.
• 17 states plus D.C. formally examined or resolved to examine some element of the value of distributed generation or the costs and benefits of net metering.
• 12 states took policy action on community solar.
• 13 utility requests in 8 states to add new or increase existing charges specific to rooftop solar customers were pending or decided.
• 6 states had policy action on third-party solar ownership laws or regulations.
• 3 states had action on utility-owned rooftop solar policies or programs.

“Many states are putting an emphasis on data-driven decision-making,” noted Autumn Proudlove, lead author of the report and Manager of Policy Research at NCCETC. “There are increasing efforts to conduct studies or pilot programs before making dramatic changes to net metering or rate design.”

The authors of the report felt the number of states considering major changes to recently adopted net metering successor tariffs was noteworthy. The Nevada legislature enacted a new successor policy during Q2 2017, while Hawaii and Maine considered changes to their tariffs. Both Indiana and New Hampshire adopted net metering successor tariffs this past quarter, with the New Hampshire Public Utilities Commission intending to revisit the successor after further data collection.

A total of 140 state and utility-level distributed solar policy and rate changes were proposed, pending, or enacted in Q2 2017. The report notes the top five policy developments of Q2 2017 were: