Inside Tabuchi’s storage plus inverter system 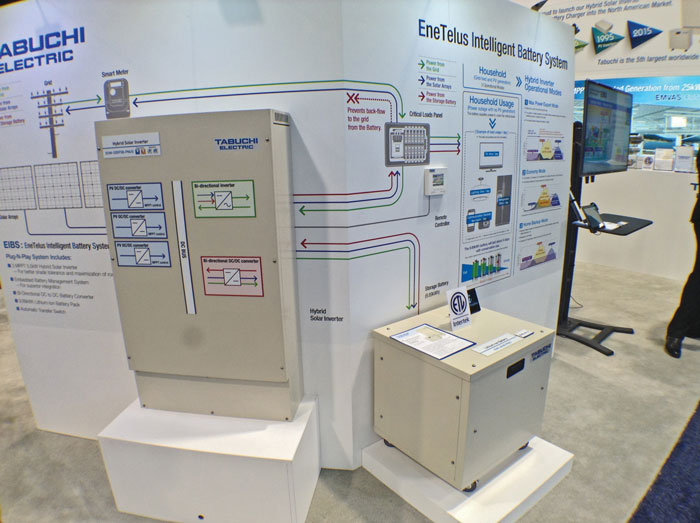 You’ve likely not heard of Tabuchi, but you may have already installed one of its inverters. That’s because the Japanese electronics manufacturer has been producing inverters for a number of companies for close to 20 years — enough to be the No. 5 inverter manufacturer in the world. Anyway, if this is the first you’re hearing about Tabuchi, it won’t be the last because going forward the company will be selling and marketing Tabuchi-branded inverters here in the United States.

“We’ve been OEMing [original equipment manufacturing] U.S. products for 15 years at least and growing the brand name in Japan, and that went so well it seemed like a good time to launch under the Tabuchi name,” says Daniel Hill, director of sales and marketing for Tabuchi North America.

“With the Japanese market flattening out a bit and the North American market continuing to grow, it is a good time for us to come.”

As we said, Tabuchi knows residential inverters — in Japan, the company is one of the top manufacturers — but along with its new foray into the states, the company is bringing a couple new products with it, including a commercial inverter product line and a storage+inverter option. 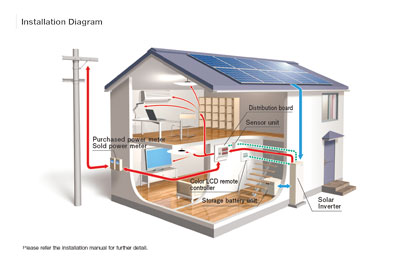 That’s right, Tabuchi’s EneTelus Intelligent Battery System (EIBS) is a solution that houses both an inversion unit and a battery as well as the transfer switch, which is usually something you’d have to mount separately. The battery has its separate box, but it is all developed together, which enhances the functionality of the entire unit.

Here’s how it works: There’s a remote control that accompanies the inverter, and the installer can do everything with that remote control, which makes it easy to communicate with the battery.

Tabuchi has seen this need in Japan. Some of the utilities there are starting to adopt regulations that dictate what can be exported when — so, not wanting the battery to charge at night and discharge in the afternoon. With Tabuchi’s EIBS, the inverter can easily be dialed down to comply with any local or personal requirements.

Tabuchi says the advantage of the system is its lithium ion battery. The value of lithium ion versus lead acid is usually the number of cycles you can expect over a the life of the battery (lead acid allows for fewer discharges). Now, not all lithium ion batteries are equal. After looking at about 20 different brands, Tabuchi decided on working with Panasonic, which has a battery that can be cycled approximately once a day for 10 years — which is the length of the warranty.

“Demand charges are starting to creep in both commercial and residential, and batteries are a fantastic solution for that,” Hill says.

Also, announced at Solar Power International in Anaheim, Tabuchi is partnering with Geli, a software provider for battery storage and microgrids, to deliver a residential solar+storage solution designed to enable faster solar market growth. The combined hardware and software solution connects with solar installations and smart home devices such as smart thermostats and pool pumps to systematically manage energy flow from the home to the grid. The partnership will give utilities far deeper insight into distributed generation and enable them to manage entire fleets of inverters across a service area, implement automated demand response programs and improve operations across programs.

“There’s a lot of solutions out there that are one size fits all in terms of having an inverter that might work with different brands, but make sure you have a well-integrated unit,” Hill continues. “We have had a lot of time to work with this battery, and it’s very well integrated with the inverter. The all-in-one, plug and play is important when it comes to the battery.”